Last night, Mark and I played two games of Hold the Line, Worthington Games' re-issue of Clash for a Continent. Unusually, we played outdoors which was a nice way to take advantage of a lovely summer evening. This re-issue has very nice components when compared with the original game. 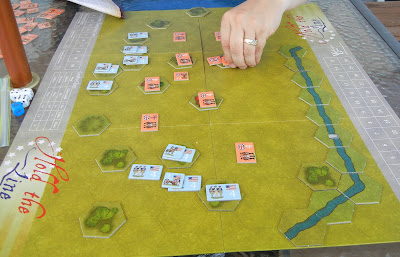 We played the Trenton scenario twice, each winning as the Americans, although each of us lost George Washington in the fighting. The game is won by the first side to six victory points which, practically, means the first side to take six units from the other. There is also one victory point on the board and the British can gain a small number of points by retreating across the bridge in the bottom right of the photo. 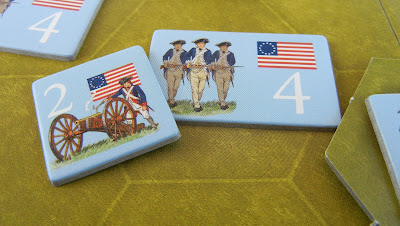 The odds and action points are stacked against the Brits (which is historical). In both games, the American tried to tighten the noose, while blocking the bridge exit. Mark was aggressive on the bottom of the picture, jumping a good unit out to bag Washington and then try to roll up the American troops around the bridge. When Iawas the British, I was aggressive at the top of the picture, trying to isolate and roll up the Americans on the hill. Neither of us lasted to the half-way point of the game, with Mark lasting slightly longer than I did. 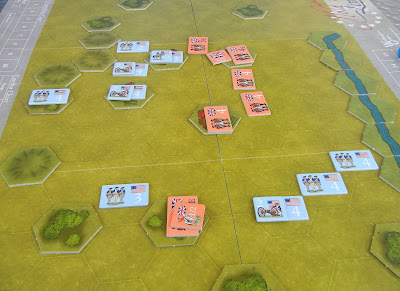 Mark then brought out Zombie dice and we played two quick games of that. A fun game suitable for kids and non-gamers but with enough choices to make it fun for us too. 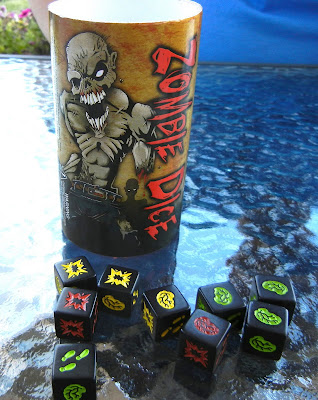 Up next: Some Star Wars HoTT on Tuesday night at the club. And some War of 1812 British are almost done being painted.
at 6:41 AM

Zombie dice, now that look interesting, where can you buy that?

It is produced by Steve Jackson Games so should be available from retailers--not sure about overseas, though.