After a week of getting no painting done due to an emergency of sorts, I've finally returned to the painting chair to crank out the last element needed for a 15mm HoTT Pirate army that I will donate to the EWG auction at MayDay. 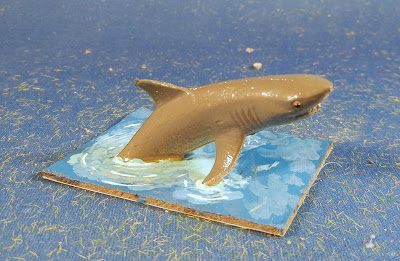 This is a water lurker (or possibly a beast?) that is designed to scare the poop out of enemy elements. 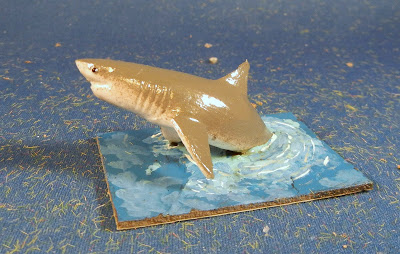 The actual figure is a cheap plastic shark. I have pictured it with a 15mm shooter element from the pirate army below to give you a sense of scale. The base is 40mm wide and maybe 70mm deep.

Up next: The remainder of my 28mm viking army is well underway and I may finish it this weekend or early next week. Tuesday is club night. And I am also working on an Empire army, of sorts, for my daughter who is keen on gaming suddenly. Must be all of those wins at Battlelore!
at 8:10 AM

Thanks! It was a fun mini to add to a fun army. The camp is a treasure chest burial expedition, including a dead lackey!

Looks awesome, Bob. That totally made my day.

Definitely a water lurker! Imagine your opponents surprise when THAT springs out of a river they're trying to cross!!

Thanks Tim. Yes, almost too big to fit on the board, though! I was hoping to find a crocodile so it could be either and water or land lurker but no luck. Best I could do is a big-ass turtle so I decided the shark would have to suffice.