Dave brought the girls by for a playdate and we got two games of DBA in using some 28mm medievals. I played a French medieval list while (I think) he was using an English 100YW list.

Game 1 saw the flower of England, above, ride forward and I tried to maneuver them onto my pikes. I was half successful in this and both of us dismounted our knights for combat. 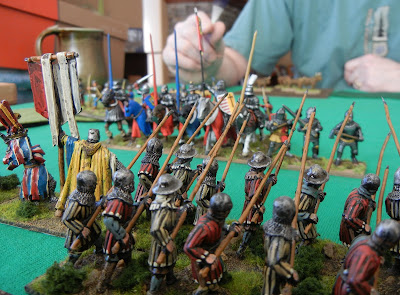 Dave had terrible, terrible rolls at the crucial moment of contact and I managed to win (maybe 4-2?). 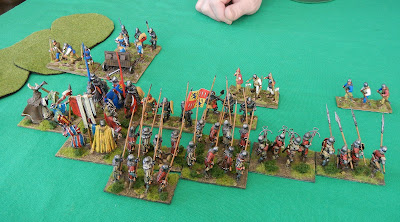 We set up again and Dave ran his mounted down the flank while he pin cushioned my pike. He won 4-1, although I did managed to snag his general on the last turn.

Tricky to make the French go. I wonder if trying some alternatives to the pike is the ticket. This might give me some better anti-knight troops (that I can refuse with) while I can ride up to his bow and dismount for some hammer time? Hard to know. Need to paint up a few more bases to make a go of that.

Up next: Some 28mm rebel troops for Star Wars. then some 28mm HYW English. Then some Star Wars characters (having a hard time getting into those). Then maybe some Norman foot to put that army to bed.
at 2:20 PM