We had five guys out at the club last night and two games ran. We collected $15 in dues but the room cost us $60 so here's hoping the silent auction at MayDay will be lucrative! 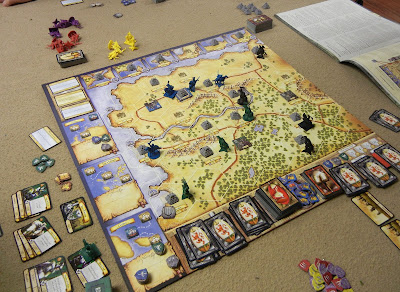 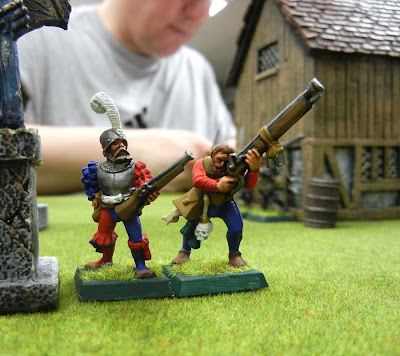 Mark hosted me in a game of Songs of Blades and Heroes, in which my dastardly goblin forces (Mark's figures) had to burn down the town protected by some Bretonnian figures supplied by Dave (I think--it was all very complicated).

I'm not sure which of those two geniuses supplied the rubber barrels (in the background) that kept bouncing off the houses instead of setting them ablaze.... But the Bretonnians needed all the help they could get since they had to lug around giant guns (note the pained expression on the one fellow's face). 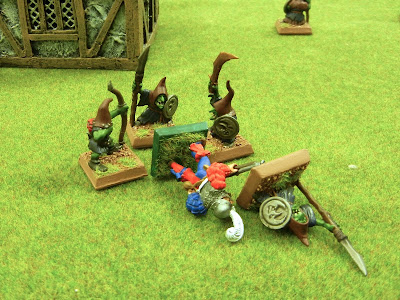 Overall, I though the rules played well. The game is about keeping the initiative and taking chances around activation rolls. My leader allowed useful group moves at the beginning but then quickly lost control, especially after Mark's leader scored a gruesome kill on one of my men and my line fled. I think this set could also be used for company-level play in the War of 1812 which might be an interesting experiment. 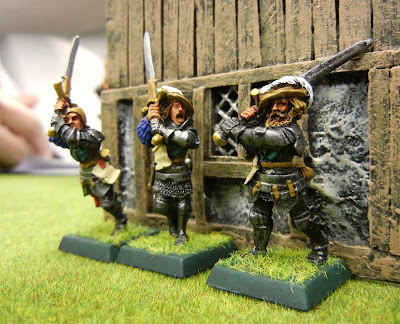 Up next: Hard to say. I have a game booked with Dave on Friday. The outdoors has it allure (I say, it was Professor Barnetson in the garden with the spinach seeds...), but I would like to build a few more plastic medievals I have to clean up a project. And I'll spray prime some more Star Wars figures tonight.
at 6:32 AM

Song of Drums and Shakos is the name of the rules for Napoleonic skirmishes by Ganesha Games. The supplement has the Army list for the War of 1812. Their ACW rules, Sixty-One Sixty-Five, allows you to play one company per side, but the figure still represents a single person. With multiple players per side you could play more than one company per side.

Hmmm. Very interesting. With the vast experience I now have with one game under my belt, I don't see that the mechanics are particularly linked to the figure ratio.

That is to say, why not replace a single figure with an element and call it a company. Instead of knocking the base down, put a suppressed marker on it. Otherwise, you should be good to go to fight out low-level engagements.

Maybe I'm missing something there. I think I will give it a go and see how it plays out.

Every schoolboy knows those are Empire troops and not Bretonnians. Bah!!!

With respect to company level games, I think there is a dearth of rules for games with individual based figures in small units set in a Black Powder era (or earlier). Games seem to go from skirmish to battalions with little in between for scale. At company scale, you can play 1:1 with figure removal, and that appeals to me. Maybe I should look at this 61-65 for ideas....

Sorry, all that GW stuff looks heroically the same to me! Mea culpa!

Interesting observation about the "jump".

Since our game, I read the ACW version. Some innovative additions in it that help capture the period (drummer allows re-roll on activation, standard bearer helps morale, chain of command, skirmishers, etc.). I am going to set up a game with my 1/72s I traded from Dave, next opportunity. They are all painted so nothing is in my way, except needing a few small movement trays of the right size.

Interesting but shading towards WHFB, no? :) "I've got the standard of power and the horn of annoyance so I can reroll hits except from your cannons of thunder... hey! your whole army is cannons of thunder!?!?!"

Dave passed me his copy of the Nap version for a peek. I think you could strip out stuff like ammo rules and whatnot, play with elements and do a decent battalion-level game (where bases are companies).