I completed the first units for a new Empire HoTT army for my daughter. Obviously not GW's Empire, but rather troops from a moderately more evil Empire. These are 25mm metals from the 1980s that I picked up on eBay. I have enough pieces for both a Empire and Rebel army that I will chip away at over the next several months. We'll be using these rules for our games.

Like any child of the 1970s, I would happily have sold my grandmother for a Star Wars army the moment I saw a picture in Starlog where someone had carved wedges out of the back of the knees of a Kenner Han Solo figure and posed him as down on one knee firing his blaster. But with my allowance being 25 cents in 1977 and figures running $4.99, it would have taken me until now to get one. 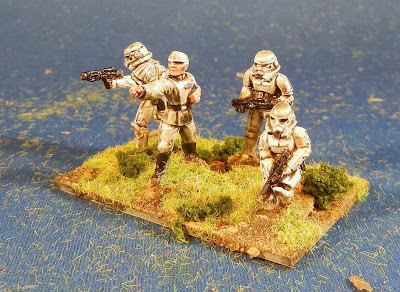 These figures are from the 1980s and are both crude and small (25mm) by today's standards. I briefly considered using the much larger (33mm) plastic collectable figures but, while browsing for them, I ran across an insane job lot of these guys. They arrived loose in the box with several layers of enamel paint chipped to hell so I soaked and scrubbed (and soaked and scrubbed...). I then weeded out the bad home-recasts!

The result was four bases of storm troops plus four bases (below) of support troops with larger blasters. I was going to work these guys into the squads but had difficulty finding adequate support weapons so decided on two-man "machine gun" bases instead.

I also had three bases of snow troopers. But why base them on grass, you ask? Well, fellow nerds, these guys are actually listed as "elite" troopers, not simply "snow troopers" thus three to a base with basing to match the rest of the army. I think of them as the stormtroopers of the... errr... stormtrooper set.

Up next: I have a large box of figures to work with so up next will be some support units drawn from the titanium series star wars releases. I also have some Imperial naval troopers ready to paint. Then onto the character units after that. I also have the last of my 28mm vikings drying on their bases.
at 6:28 AM

When I had read you were building an "Empire army" for HOTT I thought you meant using Warhammer Empire minis.

I do have a bunch of Empire minis for an Italian renaissance army (later this year, I think). But these are way cooler!

Tim's unfortunate comments reminds me of a truly awful fanfic depicts a StarWars/40K crossover....
the horror...

I almost lobotomized myself with a icepick to get it out of my head...the hazards of working in the geek industry.

Bob, I love it! Well worth the work of scrubbing and painting. I want some.

Are these the old West-End games miniatures? I found a whole rack full of those in Disneyland in Florida when I was twelve. If I knew then what I know now I would have emptied my wallet at 33cents a Stormtrooper....

Thanks Guys. Yes, these are the old WEG figures. Nice stuff but dang did they make 25mm figures small in them days! I'll have to post up a comparison picture with some 28mm figures. It is a big difference!