I swung by Bruce's house on Wednesday for two quick games of CCN. I'm not sure of the scenario but the French side was a delaying force and it was under attack by the British and (alas) the Portuguese.

I managed a win in the first game with hot dice, particularly as I drove the British left up the side to capture a victory hex. The French face a tough challenge of deploying out of an "all-centre" start position and then having to cover their flanks while bracing for an onslaught in the middle. The good news is that they hold a line of hills in the centre.

In game two, again the dice helped as I played the French. Bruce came up the left as the British but I managed to stall him with my cavalry and then shoot him up. He displaced my cannon off the hill with a "short supply" card (jerk!) but in the end this may have saved the game for me as he flanked my right and started to roll up the line until my cannon laid waste to his troops.

It would be interesting to try CCA with a DBA activation mechanic rather than the cards. Although I suppose you'd lose out on the special cards so it might turn into more of a slogging match. 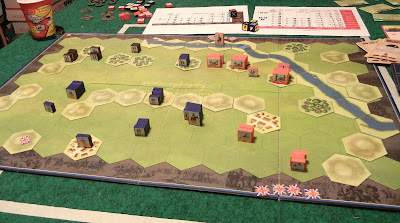 Up next: Some goblins are awaiting basing in the basement along side a mob of wookies. And I have some more Star Wars Imperial characters underway although work has taken me away from the painting table this week.
at 6:06 AM