We had 15 guys out last night for the club, with three big games running. I didn't get a picture of the WarMachine game (alas) but I did snap some nice ones of Dave's playtest of his MayDay game. 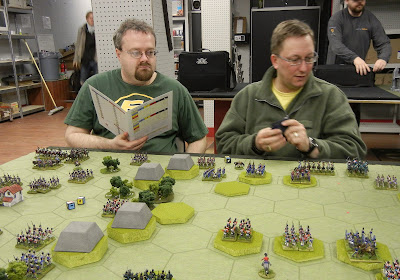 Here we have Scott and Mark setting up their side to win the first game. We managed to get through the scenario in about 90 minutes with a fair bit of learning. A close but decisive French win (6-4 maybe?). 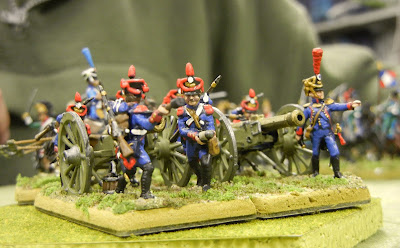 Dave has done a nice job over the past two years of painting about 400 figures for the game. Here you can see some of the French guns. Dave sat in on the second game and was cursed by bad luck with the card (6-3 for the British?). Tough to advance on the left side when you have no troops there. 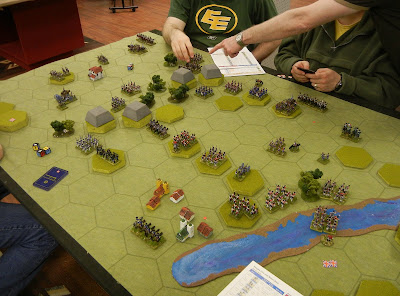 Justin put in a big game of Command Decision to test his MayDay game. Here, Andy deploys his Germans. Shouts of "I'm out of ammo" were heard from his position shortly before it was over run. 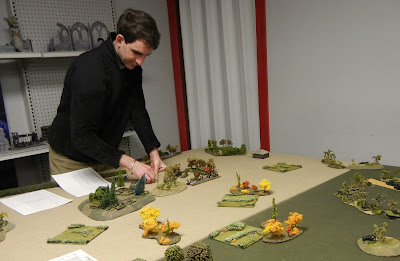 Up next: Some 28mm vikings. Then likely some more Star Wars Imperials. Then maybe some 28mm foot knights to finish off a French army.
at 6:36 AM

Thanks--it was a good night at the club. Dave's minis are very pretty.

Thanks Tim, yes, it's the Vimiero scenario from the box game. CC:N is excellent.