I'm slowly chipping away the remaining figures for my daughter's Imperial Star Wars army. I have the figures for the character bases primed and awaiting inspiration. In the meantime, I did two bases of shooters.

These are naval troopers. Not the best figures and I struggled with the colours. I originally went light grey cloth and black boots, gloves and whatnot but that was quite stark and mono-chromatic. So I then I used a dark grey in lieu of black and finally went with brown boots and gloves and darkened the cloth with a wash. In the end I'm not all that happy but I'm not stripping them again. So I think I will declare victory and move on. 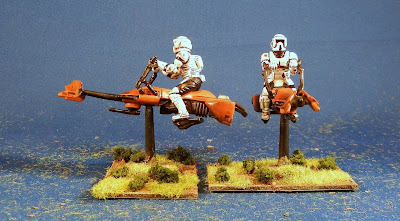 The speeder biker riders are from the Titanium series and are 33mm figures. They look quite a lot larger than the 25mm West End Games figures but speeder bikes in 25mm are almost impossible to find (I have one with a rebel rider). 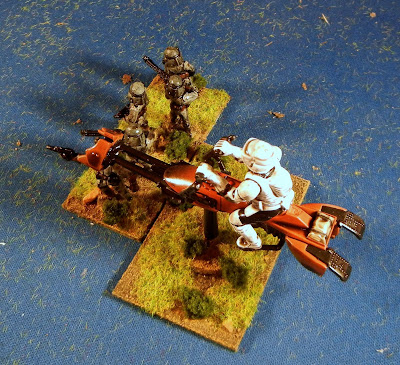 If you put them on the table, you get an interesting forced perspective effect. The speeder bike is roughly at head level for the ground troops. But looks like he (or (NSFW) she?) is flying quite a bit higher. I've also had a couple of requests for scale shots: below you can see the troopers against Wargames Factory Romans.

Up next: Some medieval foot knights are being based up and I am painting the remains of a goblin army I started more than a month ago. Then back to Star Wars, I think.
at 2:40 PM