Rest of the Vikings

Last night I completed the rest of my DBA viking army using Wargames Factory plastics along with a few Old Glory pieces. I painted most of the figures back in March and then stalled out for a few weeks. 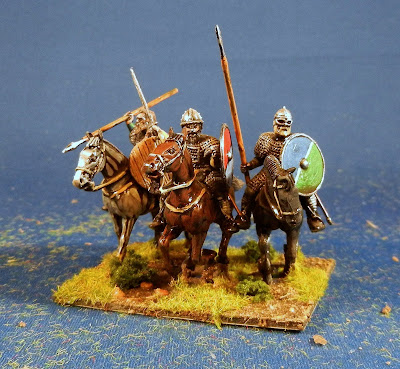 First up was a unit of 3Cv. These are Conquest Games Normans with Wargames Factory heads. I think they turned out just fine given my modest skills. 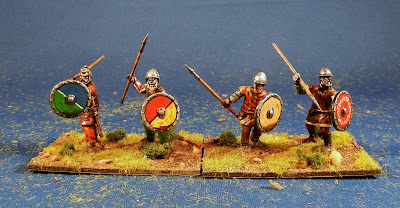 I also did two bases of spear-chuckin' 2Ps 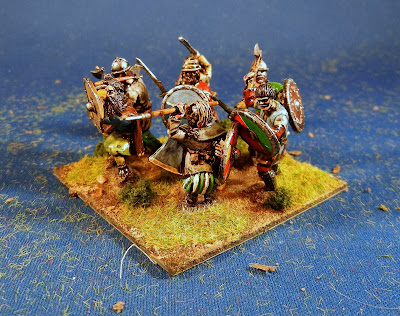 There is one base of 7Hd--a lot of painting for one only quasi-useful unit. A couple of Old Glory guys help mix up the poses a bit. I was using WF generic dark age warrior sprues so the figures would be a bit plain if I used seven WF figs. 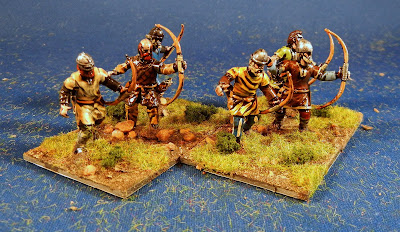 There are two bases of archers to give the Leidang some distance shooting options.

I also decided to add in a few figures for a HoTT version of the army. So far I have settled on three flyers to create some extra mobility. These are Gyre Falcons from Heroclix (I think). 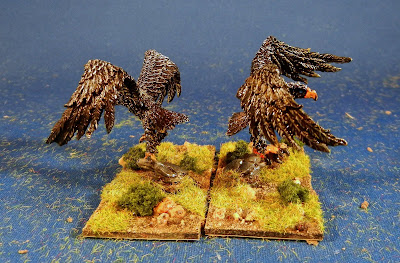 Up next: Some 28mm foot knights are primed and ready to paint. And I'm at the basing stage for some more 25mm Star Wars Imperials. Tomorrow I will likely post a grab-bag selection of sci-fi minis for sale (25mm Aliens and Star Trek) and some much larger pewter Star Wars and Star Trek.
at 6:53 AM

Thanks Ray. I think the falcons turned out pretty well and add a nice quasi-fantasy dimension. Nothing too out there like a magician or a behemoth. But some giant birds of prey and a hero seem to fit in with the Norse myths well enough. I'm just glad to get these guys done. I love the dark ages, but dang is there a lot of foot!

Excellent figs. Do you have to re-paint the heroclix figs or can you live the pre-paint?

I sometimes touch-up the paint job (dry brush the texture, paint over dumb colours, etc. )and then give it a magic dip and usually live with the rest.

Your Vikings rock. I use mostly Wargames Factory figs in our Dark Age armies too.