We had 11 guys out at the club last night with three games running. Kevin and Scott played a game of WHFB 8th Ed. Kevin trotted out a lizard army which was spectacular to behold. 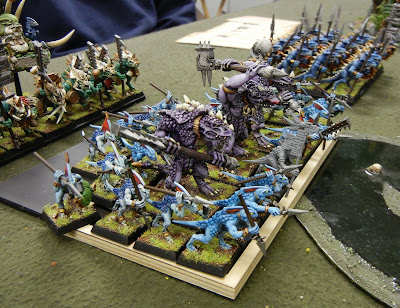 He faced down Scott's tooled up demons with some sort of riders of doom unit pictured below. In the end, the lizards managed to vanquish the demons and which the demon press is calling "a really bad roll of the dice". 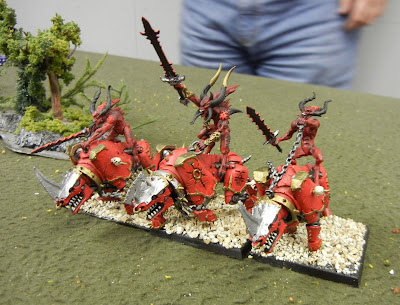 Dave hosted a game of Black Powder Zulus. I'm not sure what happened here in the end but it was very pretty. 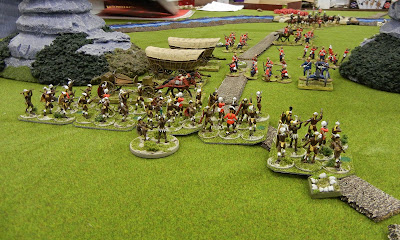 Bruce brought of Command and Colours Napoleonics for a trial run. Having luckily won both games we played, I am firmly convinced it is the best Napoleonic game ever! Very much like Command and Colours Ancients except almost every unit has a missile attack and unit strength deteriorates as casualties mount. This gave the game a different feel and terrain seemed to matter a lot (although that may be the scenario). The loss of combat effectiveness made me treat damaged units differently--I was far more likely to pull them out of the line.

Like regular CCA, the command cards are a wonderful mechanic, making the game very accessible. Yet the cards also heavily dictate one's strategy. In our second game, I got two forced marches and three attack right cards out of the gate. So I marched up the right and then just kept attacking. There were some decisions for me to make about the specific tactics but the strategic choice was made with no real reference to my disposition or the terrain.

On balance, I think the mechanic is a fine one--it is just slightly jarring in terms of reconciling your notional role as CnC and the actual choices you have. It is almost like your actual role is the three brigade commanders and you get to influence, but not ultimately decide what the CnC will order. I would definitely play again.

Up next: I'm working on some 28mm Saxons and have a bunch of 15mm DBA armies to paint up for commissions. Updates will be slow for the next two weeks as my computer access will be very limited.
at 6:31 AM

Bob, that C&CN looks like a great game. I'm going to pick it up.

Certainly one of the better Nap games I've played. Straight forward rules, appropriate and reasonably consistent abstract, easily miniaturized, and little opportunity for button counting commentary. Hell, there is even an option for forming square for those who must have that.

I'm not sure the shooting ranges are all that realistic but they seem in proportion to the game concepts so it "works". I predict significant poo-pooing by Nap fans who want to be General Wellington but still worry about whether Private Parts is under cover or not.