Last night I completed the basing of my AWI British artillery units. These are 1/72-scale models from two Imex sets. The first set is British Artillery which contains four guns and assorted crew.

The guns are howitzers (which is nice) but are rather small. I used two of the guns for the British and set two aside for the Americans. I also mixed and matched crew between the sets. 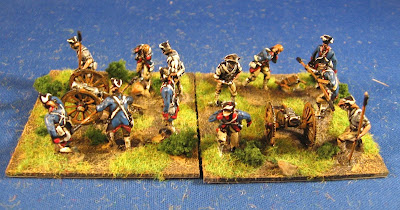 I then pulled two cannons (although these are still small) from the American Artillery set. These are shown below and appear to represent two-pounders.

Overall, these turned out alright and four bases of artillery is likely more than enough for any scenario I might end up running. With a bit of foreknowledge, I might well have avoided the British artillery set; howitzers are interesting but the guns are very, very small. 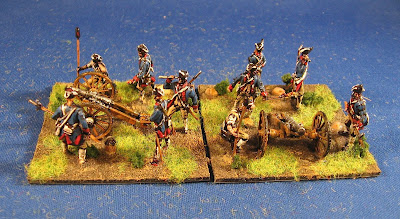 Up next: AWI American foot, dragoons and artillery and just rolling off the production line and then some 15mm EIRs. Then back to 1/72 AWI with British dragoons and cavalry.
at 10:04 AM