While traditional cavalry units were not common in the AWI (versus, say, Europe), I did want to include some horse options for both the American and British units in my armies. This is necessary for some scenarios (e.g., Guilford Courthouse, Cowpens) and adds an interesting dimension to ahistorical games.

The British were easy enough to figure--Italeri does a set of British AWI light cavalry. But what of the Americans? I decided to model the American horse as dragoons--men who moved on horse but fought on foot. I pulled the horses from the Imex British and American foot sets and then paired them with some foot fellows in a mix of uniforms. 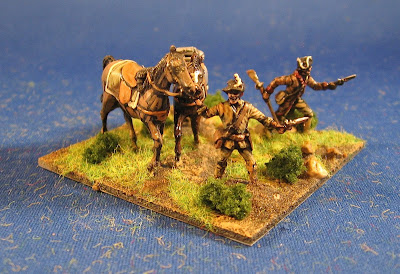 In retrospect, having the horses tied to trees or a fence and the foot fellows kneeing to shoot might have been the better choice, although that would have been hard to fit on the right bases (these bases are already too deep for DBHx standards). That said, I'm fairly happy with these two units. 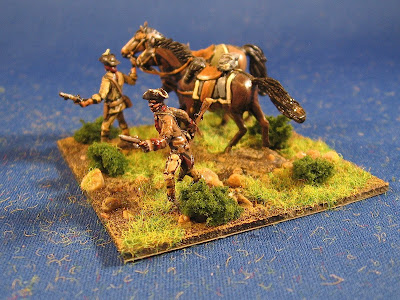 Up next: AWI American artillery are drying and I'm almost done the British dragoons. I also have finished some 15mm Romans. Alas, work commences again today so that will cut down on my productivity some.
at 7:09 AM