I completed a group of 15mm US infantry to go along with the halftracks I painted earlier. These are Battlefront figures. It has been awhile since I painted WW2 (and even longer since I painted US troops) and it took me some time to figure out the paint scheme.

Painting on a black primer and then doing a black wash saw them come out too dark the first time so I did a quick set of highlights to lighten the figures. I'm not sure I got the colour right--maybe too much blue. But then again, it depends on the light you are viewing them in. These look a bit more M*A*S*H then The Longest Day to my eye.

There were five bases of rifles. 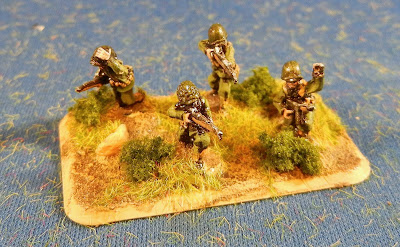 I thought the variety of poses was pretty good. The fellow holding onto his helmet is a nice pose but not sure one really needs more than one of him. Yet when I consider all of the throw-away poses in old plastic sets I think I should just keep my mouth shut.

There were also five bases of bazookas. 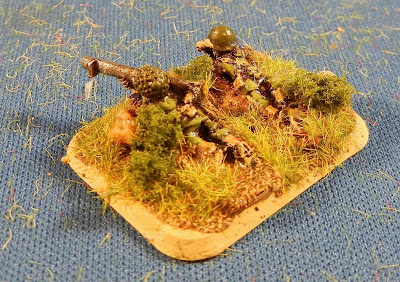 The fellow standing is a nice variation but I would have preferred a second prone pose. 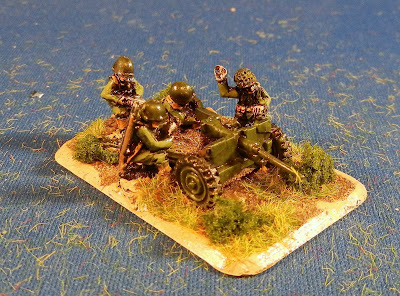 There is a 37mm ATG to provide some support. Not sure how useful that is unless they were charged by a Volkscompany of Panzer IIs. But it will make a satisfying pah-twang as it bounces off the front of a Panther. 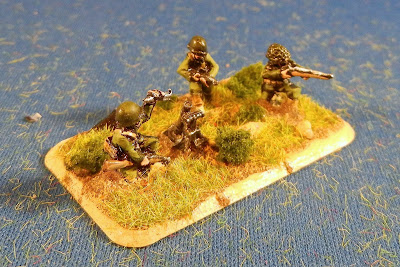 There is a single base of mortars as well as an HQ base (not pictured). And there are two bases of MGs.

Up next: It is club night tonight so I may have pictures of Zulus, C&C Napoleonics and replicant-Mark to share. Then I'm off to spend some time with the family and work on some 28mm Saxons. These are going well but slowly--lots of detail to ass around with. On the Saxons, I mean.
at 1:48 PM

LIkely I won't be able to sustain that pace. These 28mm Saxons are killing me. Big shields all with different designs, no uniformity of cloths, %$^ing facial hair tcuked in behind the shields. Give me some clean-shaven 15mm Romans in identical chainmail any time!

I'd settle for 2000 figures this year. Should get me through most of what is in the basement. I also have a bunch of stuff to push off, including painted 6mm medievals and a whack of 10mm Warmaster fantasy.