A box of commission stuff arrived last week and I decided (to mix things up some) to have a go at the 15mm WW2 stuff first. There was a US armoured infantry company in there. The infantry bases are still drying but the halftracks and the M-8 Greyhound are done.

The scout car is a nice model. It came with two figures for the turret but I could not get both of them to fit. It has been three or more year since I've painted any armour so I had to figure out how to do that again. The wash effect seems to work. 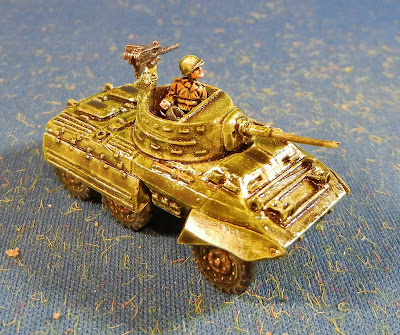 I used a similar effect on the halftracks. I've no idea why the reddish rust on the tracks pops so much in these pictures--it does not look nearly so red in reality. 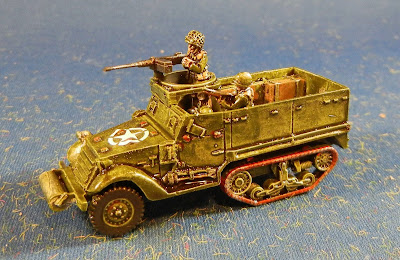 I also have a bunch of infantry drying. I had some difficulty trying to get the colour of the uniforms right--we'll see how they look once I snap some pictures. 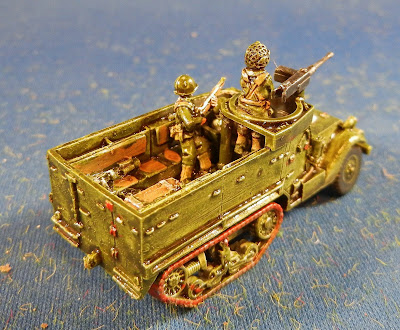 Up next: Well, some 15mm US infantry. I am also working on some 28mm Saxons. Given events over at Wargames Factory, I won't be buying any more of these. Yet there is another box of these guys on my shelf along with some vikings. The good news is the vikings go well with Gripping Beast so I can get enough plastics to complete that army. Then back to some commission work--a DBA army of some kind as well as a bunch of YS howitzers await!
at 6:03 PM

I've just been informed the tracks should be black rubber (doh!). That is an easy fix to make; good thing that was caught before these posted!

Good Year made the halftrack tracks. Most of the working ones still in use today are using the original tracks. They made them to LAST.