We had 12 guys pass through last night with nine playing games. Scott and Dave played two games of Command and Colours Ancients. Things are not looking so good for the Roman player over on the right flank. 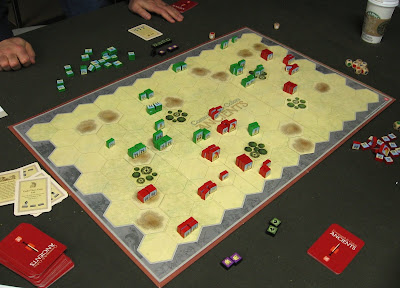 Terry, Chen and Bruce played a game of Civilization. There were a lot of components! 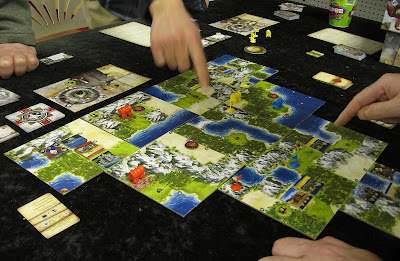 Dave and Mark commanded the sheep-lovin' Scots in a 28mm game of HoTT. Facing them where the slack-jaw skeletons commanded by Justin and me. Below you can see the results of charging my three bases of riders against Mark's knights in support of Justin's line. Hey, where'd my riders go? 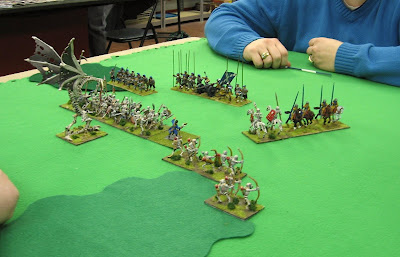 This pretty much summed up the game--the skeletons didn't have the stomach for the fight and could never quite finish anything. Below you can see my line facing down Dave's cagey Scots.

The picture below was about mid game and I figured Mark was about to get boned. Neither knight can retreat and the fellow on the left is an aerial hero. We should have gotten at least one. Alas, the old maxim "In case of emergency, roll 6" proved our undoing. An ignoble defeat for the undead. 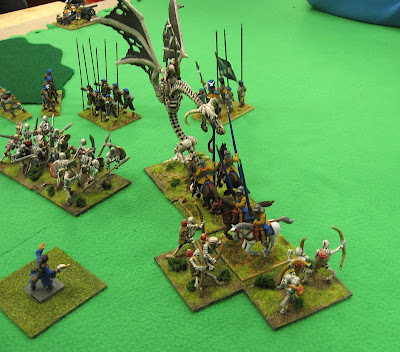