With only British dragoons left on the painting table, I finished the basing on these 1/72-scale American artillery pieces. The kits are a mix of Imex's British and American artilllery sets.

These fellows are small howitzers with a mixed crew. I painted up the American artillery troops with a few more guys in civvies. 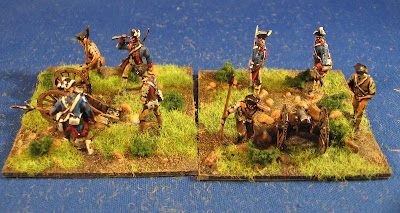 And below you can see the small, two-pounder cannon.

Overall, a useful addition to the armies. With only the British dragoons left, I now turn my mind to how I could add a few elements and make this army more fantastical for HoTT. I think a flying ship of some kind would be a nice addition. Lurkers (Benedict Arnold? The Swamp Fox?) and heroes might also be nice touches. 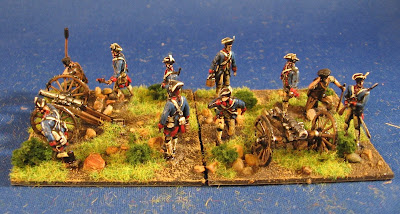 Up next: Some 15mm EIRs are dry and await pictures. And I hope to finish the painting on the dragoons at lunch today. Thereafter, who knows?
at 7:39 AM

Jebus. 2011 is 6 days old and you already have 128 minis painted! I haven't even got 1 finished yet. You're amazingly fast Bob!

That is what the ladies say! I count figures based on when I finish them so some of the AWI were painted (at least partially) after Xmas but not finished until January.

Your AWI in 1/72 is amazing! I keep looking at them, I cant believe they are plastic...its making me consider plastic figures for the first time in over 20 years!
Well done sir.