As I move forward to complete my 1/72-scale AWI armies for DBHx, I have completed the American foot units. There are 42 figures here and most are from Imex's George Washington's Army set.

I did, however, reserve a bunch of the woodsier figures for my War of 1812 units and thus had to add in a few old Airfix ACW confederates in floppy hats to make up the numbers. 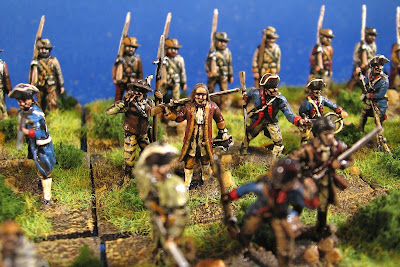 Overall, the figures turned out nicely although the Imex set didn't provide enough line troops so we have quite a mix of units.

First up are three bases of 4 shot units representing continental troops. These would form the core of any army I'd field.

There are also three bases of back-woods militia in a variety of mis-matched leather and linen jackets.

There are three bases of 3 shot units which might represent locally raised forces of state troops.

Finally there are two bases of 2 skirmishers and one base of 4 shot representing a locally raised unit. Lastly (below), there is a single general figure to allow me to use the mobile general optional rule for DBHx. I would have preferred a mounted figure but ended up using the horse that came with the box as a dragoon. 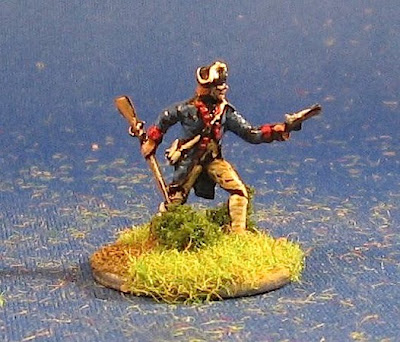 Up next: Tomorrow is club night and Dave and I are putting on a game of big battle HoTT. I also have some American AWI dragoons about to finish up today and perhaps some cannon. Thereafter will come some 15mm Romans the final AWI dragoons (British).
at 7:46 AM