I finished painting a 15mm Early Imperial Roman (II/56) army this week. These are almost all Old Glory figures (the bow might be Minifigs and the light horse are Xyston). I primed them (in deference to the weather) with black paint and future floor wax. This took some extra time (versus spraying) but allowed me to skip painting the silver. 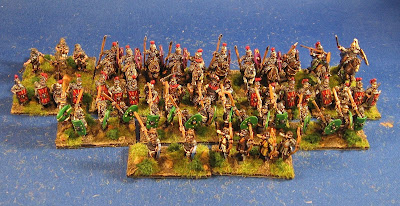 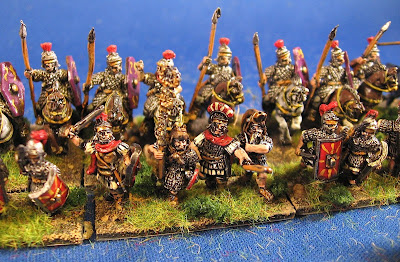 When I play EIRs, I typically use the 4Bd general option and you can see him standing here amid horns, standards and whatnot.

There is also a 3Cv general option which you can see here in the middle stand of cavalry.

Overall, there are five bases of 4Bd (including the general) which gives the army significant punch against other foot. Although beware the warband quick-kill issue. These fellows are all wearing chain mail. 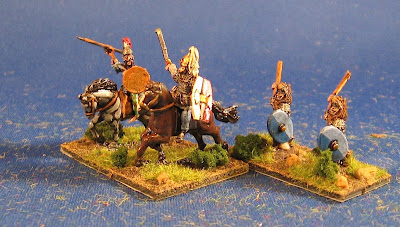 The 2LH base is a conversion of two Xyston Gaulish figures that I put on horses of unknown origins. The skirmishers are Old Glory and they give the blade a better ability to withstand mounted charges and warband. 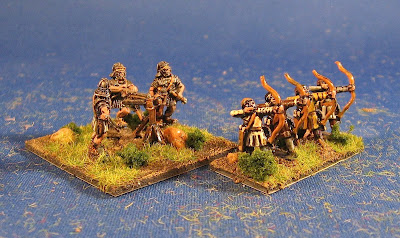 There are two types of ranged weapons. The ballista is Old Glory while the bow are (I think) Minifigs. There are also four bases of 4Ax.

These painted fairly quickly. Cleaning and glueing and priming took 40 minutes all told. Painting the nine colours (@20 minutes each) took another three and a quick wash added another 20 minutes. Then there was about an hour all told of basing so about five hours for 41 foot and 11 mounted.

These fellows are available for sale $55 plus shipping (likely $15 in Canada or the US). I'd also accept a part trade for some 28mm skeletons. offers to bob.barnetson@shaw.ca . SOLD!

Up next: The last of the British AWI dragoons. I'm not sure what follows--perhaps I'll start on some 28mm Saxons?
at 6:33 AM

I see where you may be starting to paint two 15mm DBA Armies(II/49 Marian Romans & II/68 Pictish). Could you email me, as to what progress you've made in painting them(if any?)?

Look forward to your reply!