I often find myself short of light troops, especially when I host miniaturized version of Command and Color Ancients. I picked up a box of Wargames Factory Numidians to help remedy that. Half of the troops I made up as missile units, allowing me to field both bow and sling troops. 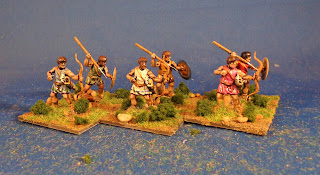 The bow are a mix of bow and spear-armed troops. If no bow are needed, then these fellows can be basic light troops. They will also work as shooters in HoTT or Psiloi in DBA (although the basing is deeper than convention). The frontages are 60mm.

I also did four bases of slingers. I'd say the more experienced slingers are the guys on the right, standing in broken ground with plenty of ammo at their feet. The guys on the left must be the FNGs who aesthetic appreciating of rolling grasslands will gain them suboptimal match-ups with men on horses.

Nice figures that went together quickly (1.5 hours for 28 figures). Add in painting and basing and it worked out to be about 5 figures and hour from box to board. For $0.80 a figure, that is a pretty good deal. There was no fancy painting here: prime black, block paint (although I did drybrush their skin), dip and base. 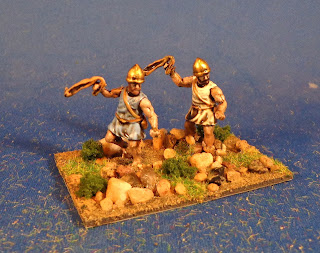 Up next: I have seven more bases of light troops drying (light foot and auxilia) as well as a few miscellaneous scenery pieces. The there are three boxes of 15mm Poles waiting to be cleaned and built.
And Tuesday is the second night of the EDBAG HoTT campaign so my imperials will need to sharpen up their light sabres.
at 9:52 AM

They look great Bob! The Numidians are so useful, and I'm looking at maybe making Roman Hastati from them.

Thanks Chen. Yes, one of the better sets of plastics--lots of uses for them. Greeks, Romans, Carthaginians--you name it.

Bob, great job on the Numidians! Nice to see them painted up.

Thanks Mark; a few more to come!