My rule of thumb is that armies that lie dormant for two or more years must move on. For that reason, I have a 25mm Anglo-Danish DBA army to sell. The figures are 25mm plastics (not 20mm, or 1/72) from HaT's El Cid range. These are based on 60mm frontages and come from a smoke- and pet-free home. There are 17 bases with 64 figures.

The sharp end of the army are three bases of blades (above) with nine bases of spear (below) to back them up. All shields are handpainted.

There are also two bases of skirmishers (psiloi) with slings. 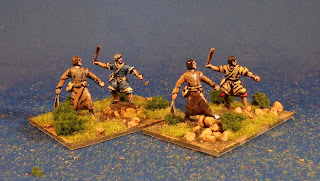 I also did three bases of bow (two longbow and one crossbow) to allow this army to morph (with the addition of some cavalry) into other armies (e.g., Normans, El Cid Spanish).

I wanted to add in one close-up image to show the paining a bit better. 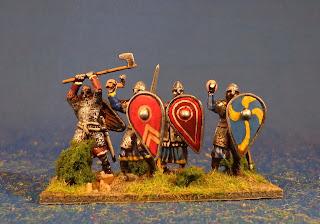 I'd like $60 plus shipping for this army. Shipping in Canada or the US will be about $20. Iw ill bubble-wrap and pack with peanuts. These fellows fit nicely with 25mm sculpts; they likely wouldn't mix in the same army with 28mm sculpts. Offers to bob.barnetson@shaw.ca .