Last night was the second night of the EDBAG king of the mountain HoTT campaign. In turn 1, both Dave and Terry managed to grab mountains, joining Dennis with one mountain each. I joined Bruce as an allied contingent in game one, facing down Dave's Winter Queen army. 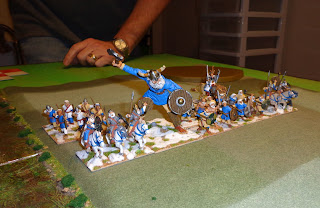 You can see me way over on the left (three bases of storm troopers) trying to join the fray across the river before Dave bagged Bruce's camp. No joy for me--I almost made it to the river before the game was over. 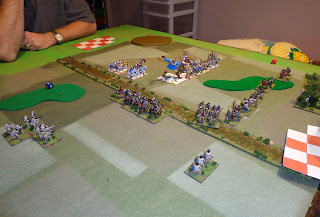 In game 2, I was also unable to be an attacker or a defender so I again sent an allied contingent (otherwise I would have just sat around). The way the geography in my part of the campaign map works, it looks like there is only about a 50% chance I can be an attacker or a defender in a fight each turn (otherwise I'm an allied contingent) and the chip draw means that I will only be the attacker 50% of the time that I'm a major combatant. And attackers will almost always face a defender and ally! 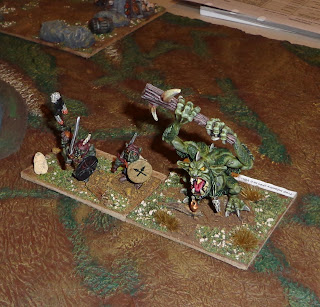 So, some strategizing was required. With that in mind, I decided to try and even up the odds for the next time I get to play attacker. I decided to join Dave defending a mountain against Dennis' imperialist ambitions (errr... sorry, desire to restore his historical territorial integrity). Stopping Dennis is in my interests. But I also decided to be minimally helpful in the hope that Dave would lose some elements and be weaker next game. 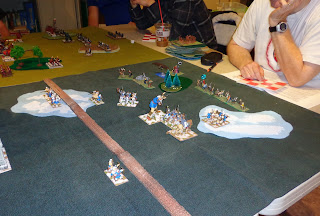 This didn't work out exactly to plan, with Dennis being down four bases before I even really got on the board. Yes, Dennis would get stopped, but Dave was looking like he'd have no losses at all! So Lord Vader maneuvered in behind his "ally" at a funky angle, causing some recoil woes (and general outrage). And then Dave's dice went south (way south) and suddenly it was an even game. 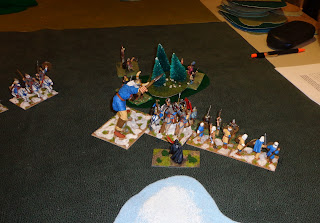 Eventually, Dave and I managed to take a base from Dennis and we called it a night. Dave rolled back all of his losses (drat) but Dennis did not get the mountain square. I'll be sure to wear my teflon gaming short next night... . I don't think any other attackers were successful that turn so Dave, Terry and Dennis remain tied at one mountain each.

Up next: Some 15mm foot are underway and I finished building and priming some 15mm winged hussars. Next Tuesday I'm playing some Dux Bellorum at the club with Will.
at 7:25 AM

Ahhh...interesting account. I was wondering what was going on in that second game - you sly dog.

Alas, largely to no avail. But whatever. Gotta try something to give me a chance at getting a mountain square.