I've been working my way through some 28mm Lord of the Rings figures I picked up at the MayDay auction. There is enough here to create an evil army to pit against the good army I built awhile back. First up are the Moria goblins.

There are four bases of shooters (in HoTT) here. Nice enough figures. I chose brighter colours than I might otherwise paint with to get a garish effect. 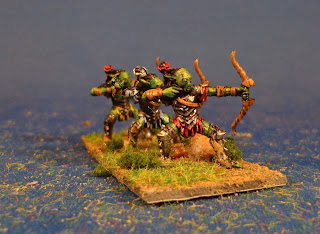 Up next: I have spear and blade/warband bases drying right now and some orcs, wargs and others underway. After that, it is back to 15mm polish troops.
at 10:38 AM

Nice. I´ve got some of them..they just about fit size wise to the 1/72nd orcs from ceaser
Cheers
paul

Thanks Paul. Yes, the Caesar Orcs were nice (ditto their goblins). Much better than their elves, I thought. Dwarves were good though lots of deep detail.