It was club night last night and we had nine guys out with four games running. Bruce hosted Chen and Terry in a game of Swashbuckler (with cool new minis from Blue Moon). Elliott and Kevin played some Warmahordes and Dave and Mark played two games of DBA. 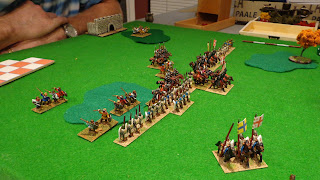 I brought out some sea raiders to face down Will's Saxons in a game of Dux Bellorum. This was my second game and his first and our armies were virtually identical except for a few special options. My plastic raiders (mix of Wargames Factory Saxons and Vikings) form up below. 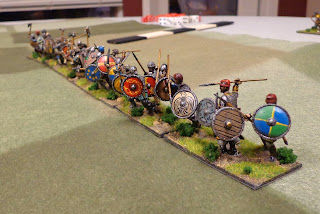 Will quickly grabbed the hill and then flung javelins down at me. I slowly back out of range, requiring him to come off the hill. He then send his damned war dogs at me. 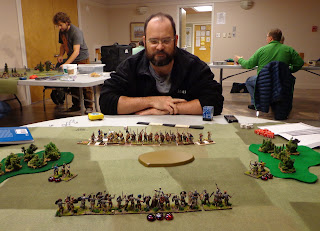 As I moved to stick the wardogs full of spears, he charged and basically bowled me over, bagging my general in the first turn of combat (jerk!). 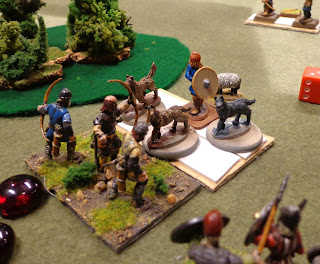 A second play shows some interesting ways the mechanics model the era. Loss of a general cripples CnC by prohibiting the use of further leadership points. I think realistic and also very damaging--I might have pulled it out of the fire despite the bad first round of combat if I'd had some leadership points to play with.

The game also rewards putting together groups of units centered on a tough unit (so you use the better unit's bravery to maneuver) with weaker flankers (because their combat power is effectively lost of you use them a support--so you wouldn't want to commit to powerful units and have to put one into a supporting role). So you get the warband led by a hardened group of warriors feel.

Up next: Some 15mm foot and cavalry and some 28mm Lord of the Rings figures.