I finally finished some 15mm winged hussars. These were quite the things to assembly but turned out okay in the end. I am short one figure so left space for it on the base when the horse arrives. The original horse was squashed in transit (think beagle) and had to be put down. 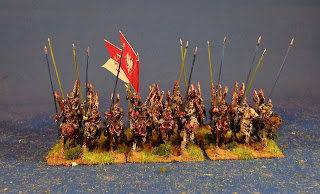 These fellows came with individual streamers for each spear but the ends are forked quite radically. Basically impossible to put on, although I've had a thought about this since I based them so may try a few before dropping the first four units off with the owner this weekend. 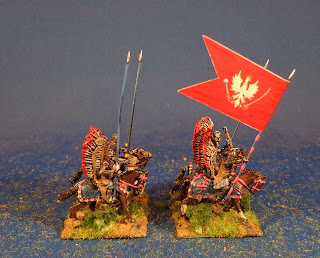 Up next: A bunch of 28mm LotR baddies are almost based and I have the rest of the army primed and ready to paint. Then back to these 15mm fellows=.
at 5:48 PM

Very spiffy, these guys are always a "wow!" unit.