We had 10 guys out at the club last night and two games ran. My camera battery died within minutes of arriving so I only got one good pick of Dave's WAB game. The gist was that Romans had sacked a German village and were carting off the good when the Germans came back and were very upset. Quite a game that was still going on when I left. Bruce and Terry made a very slick little redeployment as I was leaving, basically pursuing their way out of a really unpleasant flanking maneuver by Dave, Chen and Justin. 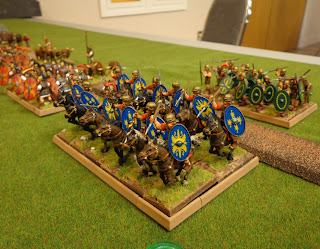 Guy, Andy and Eric played my 1/72 War of 1812 Bladenburg game. I wish I had a photo as it was quite a game. The table was 4 feet (east-west) by 3 feet (north-south) with the British force of 14 bases entering in the NE corner. It was immediate confronted by a fordable river running NW-SE. The goal for the British was to cross this river and parallel river midboard to bag some hills in the SW corner and open the way to Washington. We used DHBx and Guy rolled 1d6+1 for pips, losing the +1 bonus the first time he lost a unit.

Erik and Andy played the Americans. There were 23 bases (mostly militia, with a few regulars, dragoons and cannon) and each player rolled 1d4 for pips. I made a few changes to set-up to reflect the confused American command. Each player rolled 1d6 alternately and selected that many bases to comprise their "army" for the game. I thought this would create unbalanced flanks and indeed it did with Erik grabbing all of the regulars and a cannon on his first roll and Andy grabbing all of the dragoons and the rest of the cannon on his roll.

I then had Erik (with 13 bases) set up first with the proviso that there could only be 12 bases between the rivers and the remainder had to be behind the second river. Again, I was trying to exploit the glory-hound nature of gamers and most of Eric's forces were deployed forward while Andy had to deploy back meaning he had to cross the river. Finally, I ruled that any time the Americans both rolled a 1 for pips, they would need to switch commands immediately. This was designed to mimic the political foolishness on the American side and just generally be disruptive.

The game was tense with the Americans being forced to switch commands immediately. Guy moved the British across the river and then ran into the vanguard of both sides, losing six units almost immediately (I thought this was going to be a 15-minute game!). But he dug in despite Andy rolling 18 6's out of 40 rolls for combat. Then the superior British units started to beat back the Americans. There was virtually no cooperation between American players which helped--as did Erik's terrible attack dice.

Guy slowly evened the score and then both sides reached their break point on the same turn. So we played one more round and the British managed to bag the American unit they needed. The outcome was consistent with history but the aggressive American play saw the British bottled up and marching onto Washington over the bodies of the defeated American army. Thanks to everyone who played.

Up next: Some 15mm cavalry are being based, some 28mm skirmishers are being painted then likely back to 15mm cavalry. Next week is round two of the EDBAG HoTT campaign.
at 7:07 AM

Bob, you should have told me, I could have taken some photos of your game.