A friend is doing some 15mm Polish armies from the 17th century and dropped off a large box of troops for me to paint. I finished the first unit last night--a mix of mounted and foot. This was one of the few units with uniform jackets so I did them first. Another unit (in brown jackets) is being based now then onto the mix-and-match units. 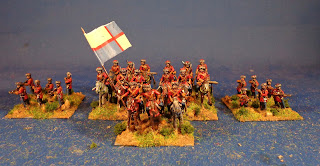 Nice enough figures, although the metal is quite brittle so bending figures straight often ends in tears and crazy glue. Reasonably clean castings with fairly fine detail. The figures have oddly thick integral bases which requires two sandings to cover (which slows things down a bit). 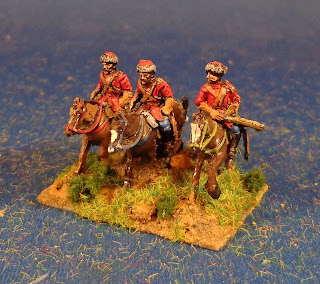 Up next: Tonight is the club and I'll be hosting an 1812 game based on Bladensburg (bring your torches and whitewash). I've never games the burning of Washington and I've tried to add a few none-game mechanics to simulate the disorganized American defense. On the painting table I have more 15mm cavalry as well as twenty-eight 28mm ancient skirmishers. These should flesh out my ancients nicely and represent light troops. I just finished the flesh (trying a new approach) and am blocking in the tunics.
at 7:04 AM