Finishing up some reinforcements for by HOTT/DBA/CCA armies, I have seven more bases of light troops dry and ready to go this morning.

I did four bases up an auxilia (in CCA), with slightly more armour than usual for lights. Again, these Numidians are very versatile troops. In this way, they are like the Bretonnian bowmen that GW does who have served in armies spanning 500 years. 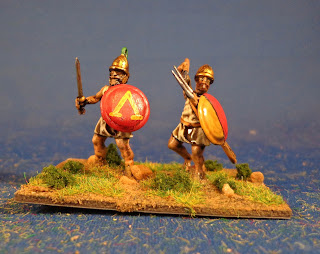 I also made up three bases of light troops (the difference being the auxilia have a swordsmen on each base). Realistically, these guys will likely cross over depending on the needs of the scenario. Nice to have some non-Celtic light foot options.  These could also morph into components of various Greek armies. But before that I have quite a lot of lead to paint. 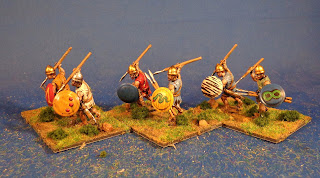 Up next: I'm building some more 15mm cavalry (frustration, thy name is winged hussars) and have some 15mm foot primed and ready to paint. I also have some 28mm renaissance DBA/HoTT armies ready to sell. I may post those tomorrow.
at 7:56 AM