Bruce came by last night for our usual non-club Tuesday game. His table was covered with stuff for his upcoming Fallcon games so I hauled out Star Trek Fleet captains. We played a 12-point game (just slightly larger than the intro). There is a lot of stuff in this box--something I forget each time until I have to set the game out! 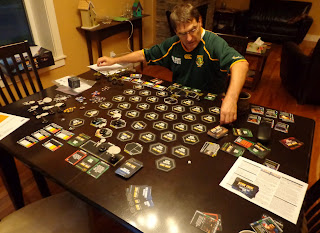 We also used a Borg modification from Boardgame Geek. I think this works better as an automated opponent for solo play. In our game, the Borg moved a couple of time but never really did anything except disrupt the shipping lanes. 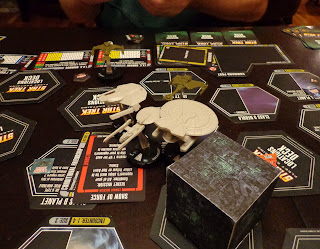 I eventually managed to pull out a late win, largely by keeping Bruce beat down with a battlefleet while completing missions with my light ships. Bruce got some unlucky ship draws (six ships are one point, none of them very powerful).

Afterwards, it occurred to us that using cloaking technology might have given him an opportunity to bloody my nose a bit more. He did blow up one of his ships before I could kill it and he used cloaking to get away from me with damaged ships (which was super annoying as none of my combat missions worked out). 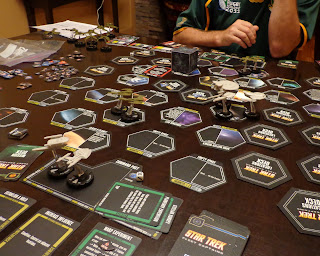 Up next: I'm working away on some 15mm cavalry and I've hauled out some 28mm ancient skirmishers to build and paint. I run out of glue plastic glue so I'll need to get some more before proceeding. I have some of the non-toxic stuff but it just doesn't work nearly as well.
at 8:29 AM