I moved another group of 15mm troops to conclusion last night. These are German mercenaries sent to help out 17th century Polish forces to repel various invaders (and do some invading of their own). 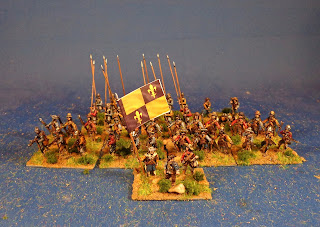 The figures are 15mm from foot to chin, making them a bit taller than most 15mm, icluding the other 15mm in this range. And there are a few guys with crazy-long necks. But painted and based, most of this goes away. 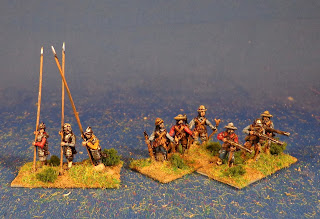 There are two ranks of musketeers (although the pose proportion does not match the box art) as well as a couple of bases of pike, a cannon and a command stand. The command figures are good. The rest tend towards mono-pose so lots of colour differences help make them look a bit less uniform. 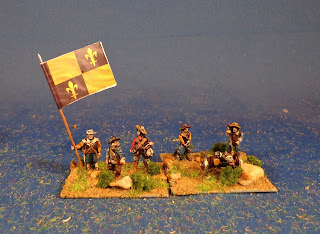 Up next: I'm painting details on some winged Hussars right now, which will put me half way through the commission. I was thinking I was going a bit slowly but each of these units if effectoively a DBA army so one a week is not bad. I also have some 28mm LotR bad guys primed and ready to paint.
at 6:50 AM

Bob, paint the edges of the flag - takes a few seconds but will really tidy up the appearance.