Yet even more goblins

This is the second last batch of goblins for my 28mm HoTT army. The four bases of warband are a mixture of grenadier and BattleMaster figures--all plastic. I tried to make them look dirty and mangey. I suppose they could also be blades,

I also completed two flyer units. I suppose they could also be used as beasts. 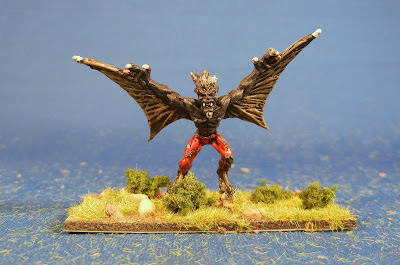 These are both prepainted plastics from one game system or another. One of the local stores has a bin of 50-cent figures that I very occasionally troll through. 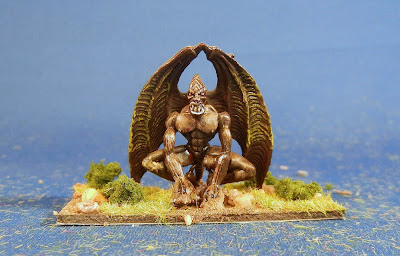 Up next: Some more 10mm Soviet (finished building the helos last night) and some 1/72 War of 1812 British regulars. Both lots are primered and need some paint. I also primed some 28mm vikings--so I guess I just need to get to the painting part!
at 7:26 AM

Is this local store with 0.50 figures a secret?

No, Whyte Knight. Just ask at the counter (sometimes the bins are even on the counter). Mostly clicky figures but who knows what you might find.

Oh yeah, I haven't been in there in ages. It seems to be closed quite often (and randomly), at least when I am in the neighbourhood.

Come to think of it, I don't suppose you have come across any inexpensive giant eagles in your travels?

I have three (I think) downstairs. In 25mm terms, they are pretty big but not giant like the griffin your dude was riding the other nice. More like really, really big birds.

Love the middle photo. Would make a great man-bat for Gothic Horror.

Thanks Jason--yes he would. If I see another one I will grab him for you! I don't get out to the stores much these days (such a pile in the basement!).

This blogs is a really nice fine, i have subscribed to your RSS Feed. Hope to see more of your work soon.

P.S. Im really liking the Orc hordes by the way =0)