Bruce kindly put a game of CCN on for me last night. I don't recall the scenario (Veloma?) and we managed to play twice. The terrain set up was interesting with a terrible bit of terrain dividing the British left from the remainder of the field.

In the first game (pictured below) I spent some time bringing the British into a decent formation and felt pretty good, especially with some lucky rolls against some French probes.

Then, suddenly, Bruce had crushed my left wing and I was forced to take the offensive in the middle and right. I won but it was very close run (6-4?).

We switched sides for a second game and I romped to a 6-0 victory. I had great cards which I played competently. But the dice simply rolled my way with three attacks resulting in units disintegrating. I also managed to snag a general on one of those attacks. Bruce took it well (better than I would have!). 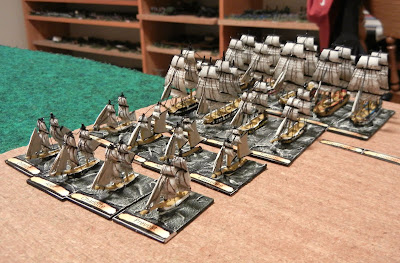 Bruce also hauled out some Napoleonic ships he has been painting and rigging. After struggle with string, he switched to cutting lengths of wire, painting them black and gluing them into place. A much better and faster way to get the same effect. 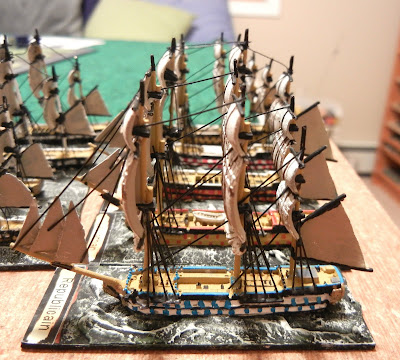 Up next: I have 24 more War of 1812 guys finished and then there are a bunch of goblins that I need to get to. Perhaps I will start today at lunch!
at 6:32 AM

You played Vimeiro (1808), Old Nosey's first honours in the Peninsula, also the scenario I am running at MayDay. Wasn't sure if it was possible for the French to win, thanks for the playtest!

The key was getting a bayonet charge to rush across the open ground without taking fire. Oh, and rolling really well.

It looks like you won on the right flank, the terrain is better there for the attacker, although the objective (Vimeiro) is on the French left. Historically Junot was unable to coordinate so the right flank attack failed. But I think you have to make that work to win.

The pictures are all from the first game where the French lost. Sorry that was unclear.

As the French, I did throw a solid punch on the French right (picking up four banners there) and then punched across the centre with a bayonet charge charge to got two more units.

The centre is a total killing ground for the french if they can't double time across.

Gosh, those ships look great...did you play a game with them?

Nope, he was just showing off.

Thanks to your friend for the idea of the wire rigging. I'm using sewing thread with mixed results. What sort of wire? Fine fuse wire or the like might work very well indeed.

I think it is florist's wire (very fine gauge). Cut to length, paint black (it may even come in black) and off you go. He used white glue (PVA).

Where you have several pieces come together, it seems to pay to do one wire then let that dry then do the next. If you are doing rigging production line, you can just move onto a different part of the ship or a different ship.

Thanks for that. I'll make some enquiries for local equivalents. Just as a FYI for people who find this post, here's some pics of a ship rigged with Gutterman "metallic" black sewing thread. (One of the more popular suggestion that a Google search on the subject will return.) It works, but the thread doesn't always take tension very well, and you have to rig from fore to aft then back the other way to keep the tension equal across the three masts. OTOH fine open-mesh fabric (like flyscreen wire) works a treat for the shrouds and ratlines. Lucky we don't have to do the cat o' nine tails at this scale... ;-)

've played that scenario a few times as the British. I kept getting crushed. The key was to seize the town on the British left and make the French pay to retake it and on the British right, to not come down off the hills and proceed across the field. Then again I can't roll for sh*t.

Scott: Hmmm. I wondered about the city on the left side. Good cover but it exposes you to a lot more fire (where you don't get to shoot back) so I hid behind it rather than in it.

Yes, the British do not want to come down off the hill unless there is some huge gain (like a "give'em cold steel" card) for doing so and you can push the French into defeat by doing it.