"Daddy, I like the civil war." Now, I could have asked "Why on Earth would a seven-year-old be interested in the ACW?" Or run shrieking from the room as the prospect of painting endless piles of blue and grey troops. Instead I pulled Craig's copy of Battle Cry off the shelf and threw down the Bull Run scenario. 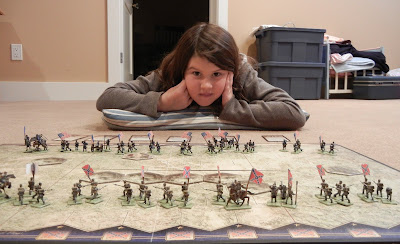 We've previously played some Battelore so Battle Cry was pretty easy to explain. As you can see, Stonewall is not much for troop discipline (her room is also messy) and I figured I would have a good shot at avenging my three (!!!) losses to her at Battlelore.

We eventually managed to get the centres into contact after she totally cleaned me out of my left flank. We'd lost an equal number of units at this point but lots of her units were down two figures so victory was within reach. 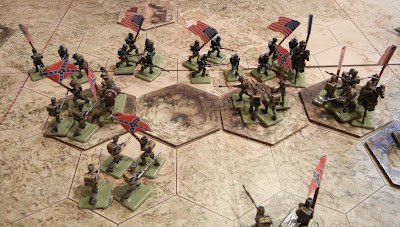 One of the mechanics I like at Borg systems is that, as the game goes on, your hands "craps up" with useless cards. To me, this simulates the growing confusion as a battle rages onward.

I can only explain the hand below, however, in terms of the entire general staff for the confederacy getting a bad batch of roast beef the night before. Recall that Stonewall cleaned me out on the left side early on in the game. She has actually managed to turn her cannon to enfilade my line! 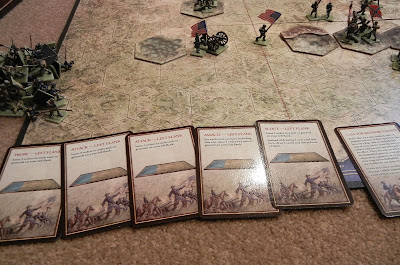 Up next: I have a big batch of 1/72 War of 1812 Americans painted and the bases drying. I also have a game booked with Bruce on Wednesday and have hauled out a bunch of 28mm goblins to have a go at finishing. Then the club on March 15 and one of my mega-trades just came through so there are two huge boxes of sprues to sort out.
at 6:16 AM