I've been working at clearing off the remaining 80-odd figures for a HoTT Goblin army. I did a number of mounted units last year but then the project dropped off the radar. But I'm hoping to finish this by the end of March.

Today I finished 20 spear. These are old Grenadier (I think) sculpts now sold in plastic by em-4. I got them in a job lot--they may have had shields originally but none came with them. 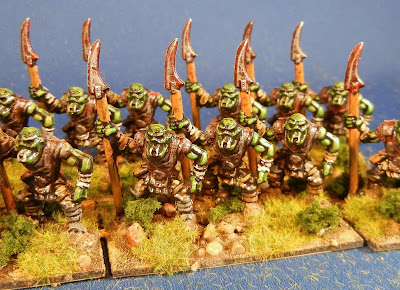 For 20-year old sculpts, they seem pretty good. I was trying to convey a fairly undisciplined army with the paint job--rusted mail and weapons--despite the uniform poses and ranks.

I also McGyverized a purple Heroclix hell dog of some sort with an old BattleMaster goblin to create a rider or mounted hero of some sort. 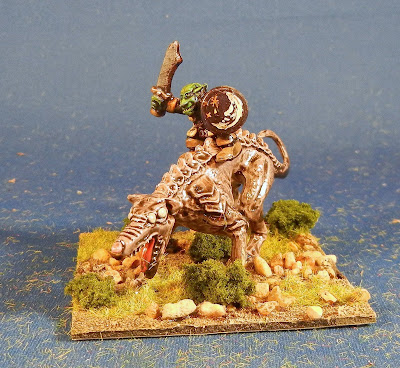 Up next: I have a bunch of goblin archers drying plus a lurker. Tuesday is club night so I hope to have some pictures of that. Then I'll be switching projects to finish up some Soviet 10mm armour for a friend. Nine are built and primered and I hope to finish these off in three lots.
at 5:01 PM

Nice job on these guys. FYI, the hell dog (Dund) is actually from Heroscape, not Heroclix.

Ah, thanks for the tip. All the clicky games are something of a mystery to me. Genius system for keeping track of stats but never played one. The figures are great on job lots for populating HoTT armies. I have a couple of kick-butt dragons I got quite reasonably priced, including a skeletal dragon that would have cost the moon in metal or GW plastic.

You're welcome! Incidentally, Heroscape doesn't use a dial base; the figures all come with army cards. The mooks get taken out with a single hit, while you use wound markers to keep track of damage for the hero figures.

You're right; it's a great source for HotT armies, and I use them for my Song of Blades and Heroes warbands. Unfortunately, the game's been discontinued. For more info on the figures and game, you should check out heroscapers.com.