These are the remainder of the American regulars for my War of 1812 DBHx project in 1/72 scale. Again from the HaT box of Belgians and Hanoverians (I think).

It was nice to use the entire box of 1/72 figures instead of having 10 or 15% being basically useless as gaming pieces. This box looked clearly designed for gamers--good on HaT!

There are 24 figures here. I painted them in an early war summer uniform. The blue is a bit too light but the wash and the colour shift made it acceptable (to me, anyhow) in the end. Interesting how the braiding on the hats came up with no effort. 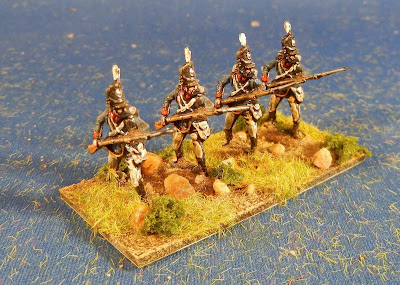 I think I have enough woodsmen figures from the Imex AWI sets to put together some skirmishers. Just need some cannons and maybe a few dragoons and the Americans are done. 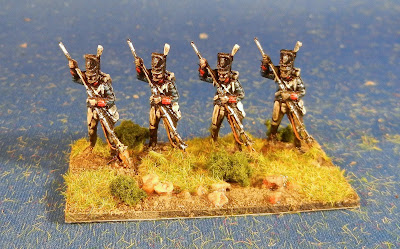 Then onto the British which will require some figure purchases. It is a shame Imex is missing the window for releasing their promised War of 1812 sets. 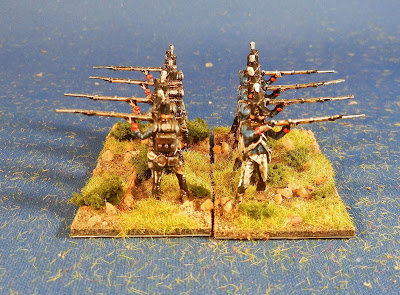 Up next: I have made a start on some 28mm goblins. If time permits this weekend, I hope to get at least five bases of spearmen done and perhaps a hero on some sort of beast. I also need to get my club game organized for Tuesday.
at 9:36 AM

Those figs are Dutch-Belgians. The stovepipes are Dutch militia, the Belgic shakos are, well, Belgians. They are an excellent wargaming set as you point out.

The Hat Peninsular British set is perfect for 1812 regulars- stovepipe skakos, all good poses, and they are cast in the softer plastic that has almost no flash, well raised detail and holds paint very well. One of the best 1/72 plastic sets ever in my opinion. 96 figs in the box = 24 stands for DBHx.

Sweet! I must see if Mark has those in stock. Not sure I need 96 but what the heck!

I'll split it with you if you like. I can always use more Brits.