With my evening gaming plans scuttled, I decided to finish off some figures. These are HaT Peninsular British Napoleonic figures. It is a nice box of 92 figures (half will go to Dave), all in useful gaming poses.

I painted these bases in a vaguely Glengarry Light Infantry colour scheme. The greened turned out a bit darker than I thought.

I also have a second lot drying which is in red jackets with yellow cuffs. These include a couple of bases of generals for the "mobile general" optional rule. 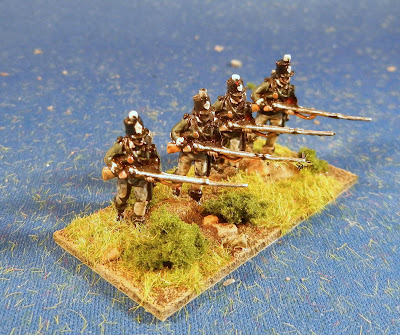 Up next: Some more War of 1812 and then back to 28mm figures. I have a bunch of vikings primed and ready to paint. I also have some 28mm medieval knights on foot to fiddle about with--nice poses from Reaper which vaguely match the GW Bretonnian mounted knights I am using.
at 5:59 PM

What game are you planning on running using the 1812 stuff?

They look nice. Have you considered using some variant of Neil Thomas' stuff?

No, haven't read Neil Thomas's rules. I was also considering For honour and glory by Worthington Games: Basically Command and Colours except with DBA style activation pips.