After basing up a bunch of stuff yesterday, I pulled out Battlelore and challenged Jessica to another throwdown. Annoyingly, she won yet again. This time, I played hard. Sure, I gave her pointers and all, buy the odds should favour me after six consecutive losses? 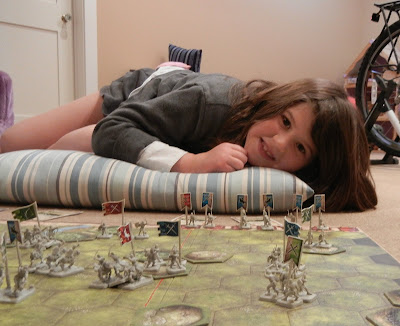 Here you can see her gloating with her six banners (to my four). A picture that did not turn out was her rolling three hits on three dice early in the game. Perhaps it is her Hogwart's costume that gives her such luck? 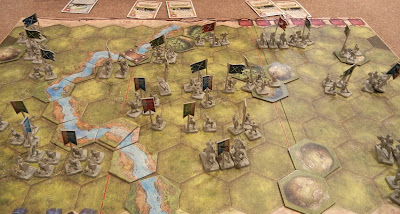 Up next: Two batches of War of 1812 British are almost through basing. I have a game of CCN lined up for Wednesday night with Bruce. Then onto some 28mm figures, I think. Either vikings or knights.
at 6:21 AM

I consistantly lose at BL to my 10-yr-old son. I feel your pain.

Bob, you have officially been emasculated. Poor bugger.

She must be using Mark's dice.

Yes, these are desperate times. I think I'll add in the magic phase to confuse her and see if I can take advantage of the extra complexity. I may also just plain start cheating... .

Bob, father-to-father; make the most of it, mate, while the kids are receptive and overtly adore you; I have an 18 and 16-year old...:)