I'm helping out a friend by completing a commission for him. There are about 30 10mm Cold War Soviets from MiniFigs in the lot and I did nine the other night to see how they turned out. These fellows all need a shot of matt spray--you are seeing a bit of glare due to the shiny finish. 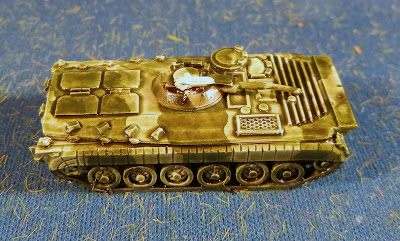 There are six of these APCs in this lot. I spent a fair bit of time on the web trying to track down the camo pattern used on the GHQ website (the vehicles are so small it is hard to tell precisely what it looks like). The web is an embarrassment of riches and yielded a dozen possible camo patterns. I chose this one because it seemed close to the GHQ pattern and offered enough contrast to look right (to my eye) at the scale.

The dip really brought out the running gear. There was a fair bit of flash to clean off these figures before I could get the tracks to sit correctly, although these had less flash than the US-manufacturers WW2 minifigs I have assembled. I also almost threw out the ATGMs on the top--they were just blobs of metal in the bag but there were six of these so I figured they must have some use. Eventually I saw the missile shape and cut away 90% of the metal to get at the missiles.

There were two of these ZSU AA tanks. I'm not sure of the radar should be white--if not, I can paint over it. I also have no idea which end is forward. I assembled it as best I could based on the pictures on the web but it is just hard to tell. Finally, there is one scout truck with a monstrous gun on the top. 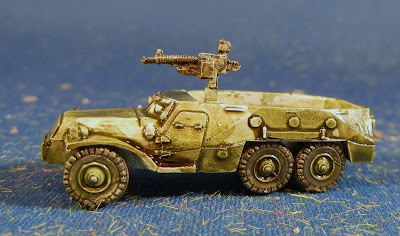 Up next: There is a club meeting tonight so I need to spend the lunch hour throwing figures into a box and printing off cheat sheets. I also have another 10 of these Soviets assembled and ready to primer if the weather cooperates today. And there are some painted goblins clamouring for their bases. I keep throwing them back into the dungeon but they seem to like that.
at 6:44 AM

I have been pondering using dip on AFV's but haven't given it a go. Think I will now! :-)

Thanks Steve; yes it works like a charm on 10mm and 15mm. I use a white primer and then wash the base colours on and then dip.