The EDBAG HoTT campaign starts this week and I needed a camp for my Star War imperial army. After some dithering, I eventually decided on some glowing gems in a pit by some ruins guarded by stormtroopers. Basically a variation on the pirate loot theme I've done before. 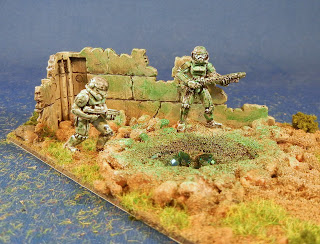 I tried to mimic the effect of glowing gems with some washes. The effect looks better in person than in this picture. After some thought, I may use some future floor wax to turn the pit into a pool with them gems in it. Ruins are old GW Lord of the Rings pieces from the MayDay auction. Stormtroopers are 25mm WEG fellows. I will darken the blaster the guy on the left is holding.

Up next: A saxon warband is done thanks to a donation of bases from Terry for my mounted guys. I also have three trees done and a couple of houses almost finished for Songs of Arthur and Merlin. A copy of Dux Bellorum just arrived as well and, of course, the HoTT campaign kicks off Tuesday. With the canning season starting to taper off and garden slowing down, I hope to paint more. I also have a huge commission of 15mm cavalry to do.
at 10:12 AM

I just ordered a copy of Dux Bellorum as well. We should give it a go next month at EWG maybe?

Sure! Simple enough mechanics but some interesting ideas. The integrated turn phase (both sides do stuff during the turn) is different as are the leadership point allocations.

Those nifty new LED lights under the gems could do the trick too. Looks good. I did not understand the "EDBAG HoTT" refrence? What is that?

EDBAG is a club (Edmonton DBA Group) and HoTT is a rule set (Hordes of the Things). EDBAG is starting a HoTT campaign on Tuesday. The LEDs are a great idea but likely beyond my abilities! But I'll keep that in mind for next time. They would likely do a good job of a campfire or torches.