Saxons for Songs of Arthur and Merlin

I finished off a the Saxon warband for Songs of Arthur and Merlin this week. These are a mix of 28mm figures I picked up at the MayDay auction. 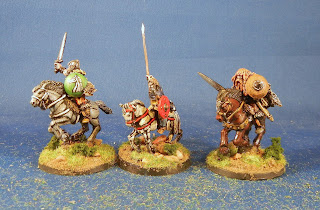 There are three mounted figures on bases donated by Terry. Yes, yes, Saxons didn't ride a lot of horses, everyone says. Anyhow, they roughly match the horses I did for the Romano-Brits. 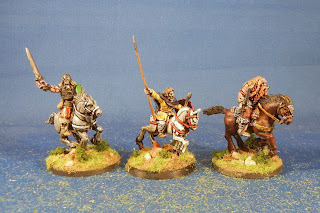 There are four character figures (musician, standard bearer, leader and druid). The druid is a GW figure and I see that I need to touch up his base. 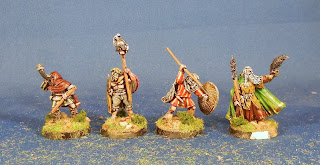 Then there are nine dudes with spears. Can you spot the one whose spear I forgot to paint? I used brighter colours that I normally paint with in these figures to try and distinguish them from the Romano-Brits. 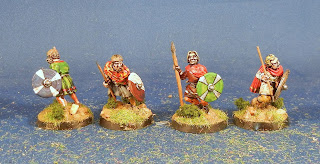 Up next: Some trees, some HoTT, and a building or two. THen onto some 15mm cavalry plus whatever I can find to paint in my own piles--maybe some 28mm ancient skirmishers. I never seem to have enough of those.

Nice Saxons. I has actually been argued that Saxons did ride horses to battle.

Thank. Yes, I've read a fair bit of discussion on that in the past few years. Seems to me you'd have to be an idiot not to ride at least TO the battle if you had access to horses.

Thanks--almost ready to play a game--just need to finish some terrain!