My weekend gaming and modeling plans have taken a second seat to houseguests but, while they are out for the moment, I thought an update was in order. 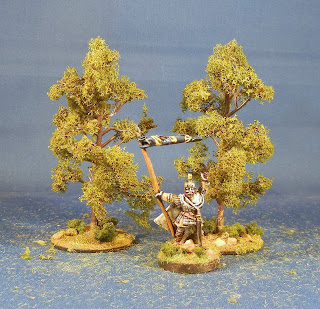 I finished two trees (yes, two whole trees!) which is a modest start on some 28mm terrain for Songs of Arthur and Merlin. I also finished the painting on my Saxon warband and I will base them when the dip has dried fully.

In the meantime, I've built several buildings from a GW kit I picked up a couple of weeks back. There was an option to make a fortified manor but I decided on multiple buildings instead. There are also some walls, an outbuilding and some signs and whatnot. These will be my September project, right after I finish a camp for my Star Wars HoTT army (which needs to be finished in 10 days!) 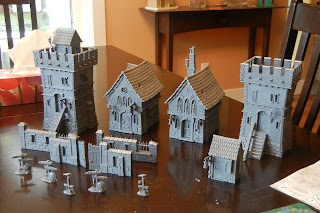 Up next: We have club night on Tuesday and I have some Saxons to finish as well as three mode trees to base. Then onto a camp and some buildings. Then I'll start to sort through my pile of bits and pieces.
at 12:15 PM

Thanks Monty; will prime the buildings the afternoon as the weather is finally breaking. Need to look around to see what others have done in terms of painting them. I'd like to be a bit drab and historical to offset the abundance of skulls on the buildings... :)