The first night of the newest EDBAG HoTT campaign started last night in Dennis' loft. There are 10 guys playing. It is a map campaign (very abstract) with the goal being to take four of the six mountain hexes. We had time for two turns last night and the theme is "fantasy" so armies are a real mix. 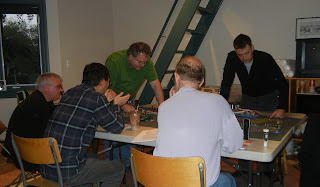 The first turn I ended up fighting Bruce's Imperial Romans with my Imperial Stormtroopers. Dave's Winter Witch army sent Bruce a contingent which showed up in my rear. Based on the mechanics, the attacker will almost always face a defender AND allied contingent and that contingent has a 50% chance of arriving in the attacker's rear. Some diplomacy will be required to make this work! 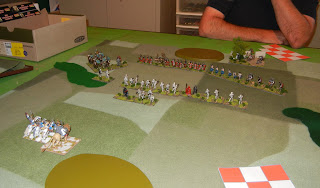 I felt like I had Bruce on the ropes but the dice didn't work out and then I lost. My efforts to use the force to choke him were unsuccessful. I managed to get all of my troops back (replacement mechanic is pretty generous so a loss is more of a set-back in the strategic game than anything). In the second game, I faced Dennis' potpourri barbarian army with Stu as my contingent. Dennis is the only one to capture a mountain hex in the first game so we needed to stop his ...errr... imperialist ambitions. 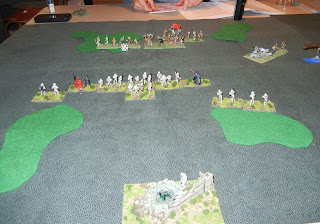 Things went pretty well for me. Stu's arrival in the rear distracted Dennis' general and Dennis' pips were terrible so he took quite the beating before breaking. I'm not sure my lightsabre sound effects were appreciated. But he got all but one stand back. As far as I recall, no one got a mountain hex is the second campaign turn. Getting four hexes is going to be tricky! 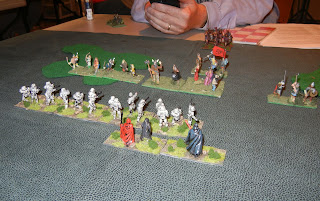 Up next: I have a building underway and some ring wraiths but things will be slow for a bit yet.
at 6:37 AM