One of the odd joys I've discovered playing Hordes of the Things is that I can often make an interesting themed army from the junk that accummulates in the hobby room. For example, lat year's Black Peter's Santa army. I don't know why I enjoy this so much. 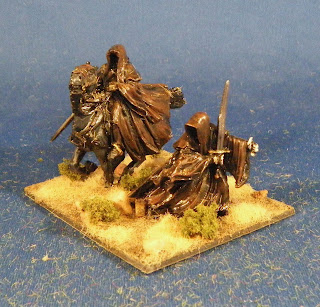 Anyhow, I picked up some LotR ringwraiths at the club auction in the spring along with a bunch of other figures and I think I have enough for a Hallowe'en themed army. First up are the ghouls. A mounted hero (perhaps the general) stalks the photo above. 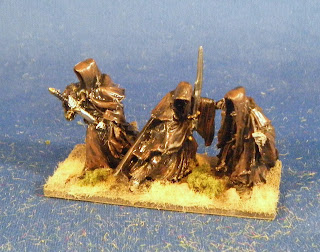 He's joined by two bases of blades. These are painted using a combination of wet-on-wet layering and the dip. I used a dry grass static grass for the bases and (for whatever reason) it washed out in these pictures. Looks harp in person, though. 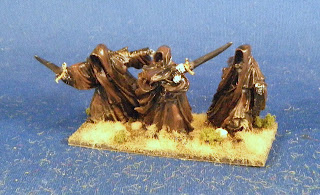 Up next: I have a flyer, a hero, a witch and some warband ready to base. I'm still painting some lurkers and a really cool camp. Then onto these 15mm cavalry that are giving me the stink-eye.
at 12:06 PM