We had the usual 11 guys out last night, with four games running. Dave and Mark played some Warhamster but all of my pictures were blurry. Elliot and Kevin played some Warmachine, with Elliot sporting an enormous mech of some sort. 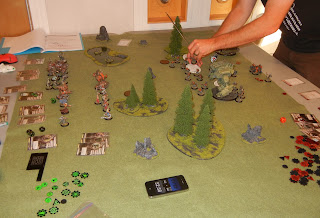 Will brought out The Sword and the Flame, hosting Chen, Terry, Scott and Jonathan. A bit Lawrence of Arabia in theme but I didn't catch the explanation at the beginning. 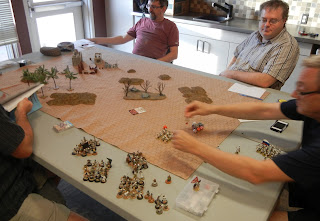 Bruce and prepped for the upcoming EDBAG Hordes of the Things campaign by pitting our armies against each other. Bruce very patiently used my Romans to beat the snot out of my Star Wars troops three times in a row. Good lord, what a pasting I took. 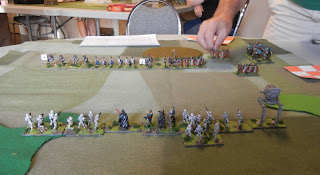 This was good practice and I've decided to slightly alter the composition of my army to give it some more punch. Below you can see one of the few brought spots of my evening where Darth Vader is about to decapitate Julius Caesar. 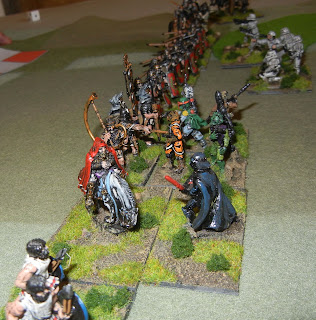 Up next: I'm basing some Saxons and some trees as well as working on painting some 28mm buildings (the stone work is done, now onto the plaster). And I need to finish my Star Wars camp for next week.
at 8:30 AM