The EWG's MayDay convention is just around the corner and I offered to run an open participation game. I chose Star Wars (because everyone likes Star Wars!) and will use the Memoir '44 game as the basis of rules (because it is teachable in about 5 minutes and plays quickly). 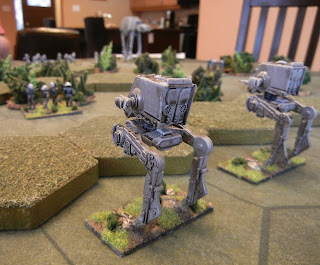 With my car in the shop, Bruce dropped by last night and we gave the game a couple of plays. The scenario was the rebels defending a series of ridge lines (and ultimately a quarry) against the imperials. I gave the rebels a pair of captured AT-STs and a laser cannon to supplement their troops.

The imperials had two AT-ATs, a speeder bike, an AT-ST, some bounty hunters and a buttload of storm troopers. I did some straight across conversions (infantry as infantry, bounty hunters as special forces). The AT-ST were tanks, the AT-ATs were elite tanks and I made the speeder bikes light tanks (two hits to eliminate). The laser cannon was artillery. I also added generals (they add one attack die to the unit they are with) and otherwise play as generals in CCA. 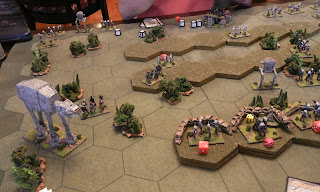 The first game was exceptionally close, with Bruce driving the imperials around my left flank. I managed to hold them off for awhile but then ran out of left and centre cards and had to start pulling  troops to the edge of the right side to prop stuff up. At this point, Bruce then launched an attack at my nearly vacant right flank! 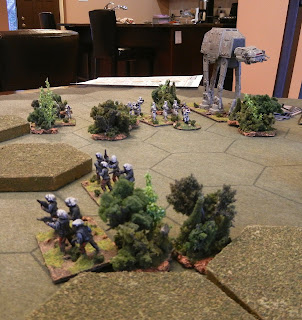 The second game saw the rebels win with an aggressive defense of the centre of the board. A double envelopment by the imperials just took too long to get set up and this was a major bloody nose for the imperials. Overall, this is ready to go for MayDay. 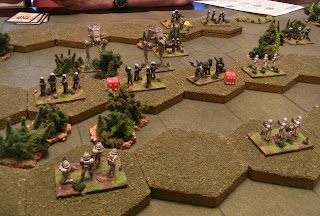 Up next: I have some 28mm renaissance guys ready to paint (halberdiers) in the basement and I may get to them tonight. Between the garden and cycling, it has been a busy weekend. And kids soccer starts soon so I expect May and June will be slow on the painting front.
at 6:28 AM

Looks like a blast Bob. Good luck with your event.

Thanks Don; should be fine--we don't normally do participation games for interested walk ons but if no one shows up, I'll just join another game!

Where did you get the models?

Have you written your rules down? If so, could I have a copy? I've been looking for a better way to use my StarWQars minis; it never occurred to me to convert Memoir!

Thanks for your note. I just proxied units from Memoir to Star Wars as set out in the description. No rule adaptation that I can recall.