Maurice on the sub-continent

Bruce rebased his Indian troops over spring break so we gave Maurice a try on the sub-continent last night. The scenario was a large group of rebels (conscripts, foreground) were usurping the local prince (mostly elite, background). 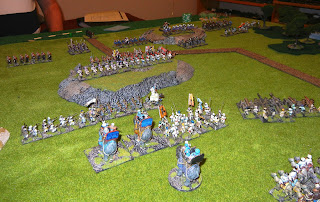 The first turn saw the rebels grab the hill in the middle with two units of foot. The prince immediately sent two units of elite foot to push them off. A short firefight revealed the prince's dice had been sabotaged and the resulting melee saw each side lose a unit.

The rebels rushed in a unit of elephants and traded them for another unit of elite foot. This consolidated the rebels' hold on the hill and the prince turned his artillery to the east in order to bring them under bombardment (oh no!). 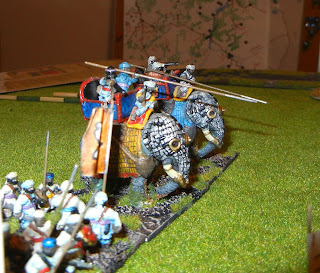 More rebel foot flooded onto the hill, hoping to set up and push down towards the prince's baggage train. But then the rebels noticed the exposed flank of the prince's repositioned artillery and sent two units of skirmishing cavalry forward. 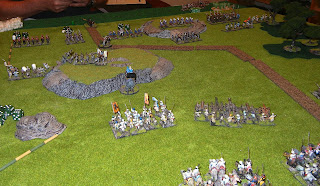 Both units of skirmishers died, but bagged three units of cannon (preventing the annihilation of the conscript foot holding the hill). In a fluke of die rolling, a unit of royal cavalry also got greased by the rebel artillery and it was game over for the prince. A big difference was the relative size of the rebel force--the conscripts sucked but the rebels could afford to lose a lot of them.

It is nice to see lucky dice overcoming poor strategy and lousy tactics! That said, the rules played very well. We finished the game in an hour (70 points each) and there was some drama to keep everyone's attention focused. I think, though, there is room for both of us to get better at deploying our forces and setting up attacks. At present, we tend to just charge in and he who rolls hot (and has the most troops to feed in) tends to win. 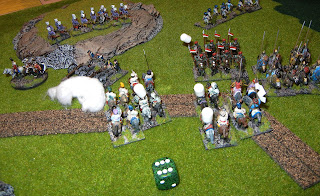 Up next: I have ten 28mm renaissance handgunners being built. And I think I have another box of them somewhere else, which will bring me close to the end of the troops I have for that project.
at 6:45 AM

Hot diggity, that looks like a fun game. Question - who makes the figs, and how did you rate the ellies (elite cav?)?

The figures are old 15mm fellows from Bruce's collection. Not sure of the manufacturer but I'd guess they are 15 or more years old.

Elephants had a base melee value of 8 and died after three disruptions, moved as infantry but destroyed the enemy if they won melee (rather than adding disruptions). There was also a drive back rule (maybe 4BWs, inflicting disruptions on anyone behind them) if the elephants lost.