Last night, I finished off a small experiment with making some entrenchments. I need a few for a MayDay scenario I am running using Memoir 44 as the engine. I also often find myself needing camps and whatnot for other hex-based games systems. 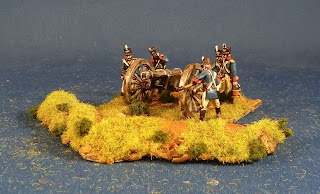 I grabbed some Crayola air-drying modelling clay and knocked off two proto-types. The first is a gun emplacement suitable for the AWI and War of 1812. It is a bit under-scale for the 1/72 figures in the photo as I might use it with smaller models. I might make other ones with a higher berm and one or two more rows of tree-trunks for retaining walls. 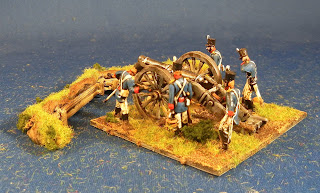 I was thinking that two of these (placed on opposite sides of the same hex) would also make a useful indicator of a "camp". I thought about doing some with a wooden palisade on the top but I think that would make an already delicate structure prone to breakage. Now, if I make a hex-shaped base and dropped the structure on top, that might be better... . 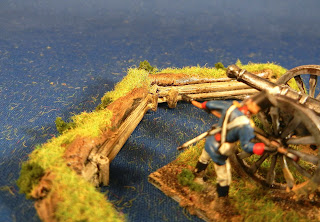 I also made a few sandbag emplacements for use in my MayDay Star Wars game. These are not fancy (or even very good!) but they will do for a one-off game. 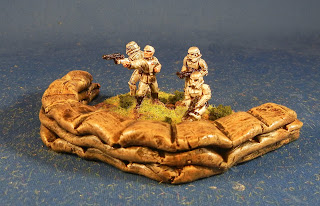 Up next: Some 28mm renaissance is the most likely project to come to fruition. Still building the fellows. Thereafter, I'm not too sure--I need to get my MayDay games together and the club meets on Tuesday for our usual evening.
at 6:31 AM

Love the french gun...nicely one!

Thanks Phil. I was happier with that entrenchment as well. I hope to find some time this weekend to make a couple more.