How fast can you go?

Over the years, I've written a couple of articles in gaming magazines about speed painting. The point I usually try to make is that there is no reason to play with unpainted miniatures; by applying mass production techniques, even unskilled painters can field painted armies.

That premise is, predictably, lost on many "readers" who query "you could paint a tank in 10 minutes, but why would you want to?" Umm, because, as stated in the introduction, the article is meant to give new or non-painters ways to 'ghit 'er done'? And that scintillating interchange is one of the reasons I don't write for the glossies anymore. 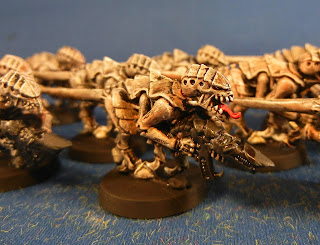 Fast forward three or four years and one of my viewers asked me "how fast can you paint a 28mm figure?" The answer depends some (the figure, the period, how much detail) but I wondered if I could paint a figure to tabletop standard in 3 minutes. So I pulled out some GW plastics that Tim in Saskatoon traded me and went to town. 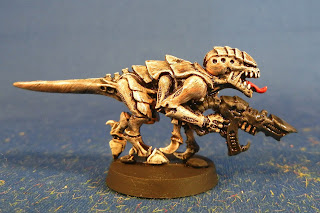 I primed them black. Then, literally as fast as I could, I did a "wet" drybrush of flesh followed by a drybrush of white, some white and red detail work to pick out the teeth and tongue and some gray to touch up the weapons, and then a magic dip. Acrylics dry quickly so I production-lined these start to finish in 30 minutes. I did then touch up the base of the figure (maybe another 15 seconds per figure).

The product is not great. But it isn't half bad and these will do as some fresh hell that spews forth from Gotham's sewers one night. Obviously you wouldn't do Napoleonics this way, but my point is that it is possible (with the right figure) to paint up an army awfully fast!

Up next: I have some olde timey prostitutes drying as part of a Malifaux commission followed by some bomb-toting pigs (tomorrow and Monday). I'm note sure thereafter--I'll need to see what is left in the paint pile. I recall have a 15mm DBA army that I might work on.

Those Tyranids look pretty good--better than tabletop standard, in my opinion.

Regarding your philosophy of getting painted minis on the table: I agree, get them painted ASAP, and don't let the perfect become the enemy of the good.

My problem is motivating myself to paint. I can put off for moths, even years, a painting project that then takes me only an hour or two ... :)

Thanks guys. Exactly. I used to see Flames of War armies at a clubhouse we gamed at and they would be primed and then there would be no progress for months. AFVs are so easy--a spray can and some wash looks better than bare metal!

That is fast; I did 50 Gaunts over a weekend years ago (never again - two contrasting colours between flesh and chitin and painting eyes and trim details etc., with washes and highlighting), but these look great. Good stuff. :)