While my paint brush has returned to 10mm AWI, I'm still moving some 28mm heroes and villains through the basing process. Up now are some Marvel figures. I was never a Marvel fan but these characters have quite a lot of charm. 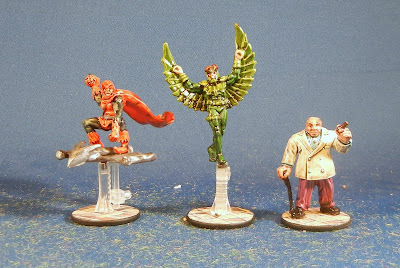 Up first we have the Hobgoblin, the Vulture and Kingpin. I recall the Vulture being bald but the last Spiderman comic I read was in the 1970s so what do I know. 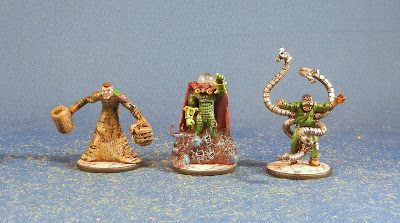 I also repainted Sandman, Mysterio and Dr. Octopus. The Mysterio figure is very nice, with a clear helm and a misty base. 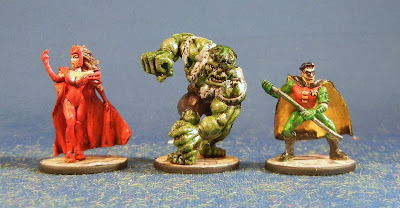 I also did some heroes. The Scarlet Witch (and Avenger), the Hulk (a lovely model) and oddly a newer version of DC's Robin. Below I have DareDevil, Spiderman and Elektra. The Spiderman sculpt is one of the most animated I've ever seen--it is lovely.

Up next: Some 10mm American AWI figures. The first units are line and some generals.
at 5:56 AM

You gotta love those repainted Heroclicks! Almost every super is available and most of the sculpts are quite good.

Andy: Yes, these are a great source of figures. They are a bit thinner than typical 28mm so it is tricky to find hordes of mindless goons to fill out the ranks. But dang they are nice models and often require only a bit of highlighting a wash before basing.