I popped out to Bruce's place last night for a second go at A Few Acres of Snow. We'd played last week at the club and I loved the game (despite not really knowing what I was doing) so I was keen for a rematch. 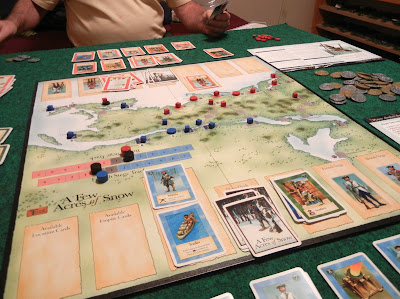 With some sense of a strategy, I started out trying to exploit my temporary military advantage by taking back Halifax from the enterprising British and got stomped pretty badly. So I gave up and instead sought to create some depth in my strength (to stave off an expected attack on Louisburg) and then settle and fur trade my way to victory.

You can see below that the French can expand to the west (right) more quickly than the British can move north. I think this gives the French a nice advantage in points at the end of the game. I also Indian raided the pants off of Bruce, snagging a goodly number of settlement blocks and sending two regiments to be refitted. So, basically, I repeated what I did last game and got kind of lucky. 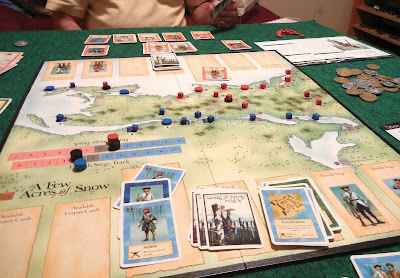 Bruce did eventually move on Louisburg, hoping to jump from there to Quebec for the win. But I (luckily) managed to defend Louisburg and stall him while pumping up the population of my villages. I managed to win in the end, although I fear Bruce is one game away from a strategic revelation which will beat me senseless on our next encounter. 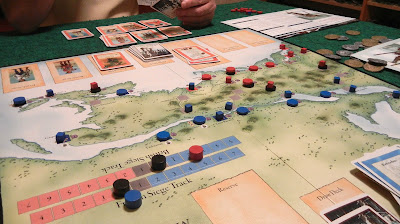 Overall, a good night of gaming. We both discovered a few opening moves that do not seem to pay off and I think I have the hang of fur trading now. I expect some snooping on BGG will give us both some ideas for our next game. I'd say this game has something to teach about the struggle for the new world and the very asymmetrical strategies and abilities that were at play.

Up next: Some superheroes are on my list. And I continue to paint on the last of this AWI commission. After that, who knows. Maybe some 28mm Romans auxilia?
at 6:06 AM