I've been putting aside boxes of the new 28mm plastics as I've come across deals and whatnot. I'm not sure why I've been doing this, but I finally pulled open the 28mm Wargames Factory Celt warband box. After some fiddling and doing nose counts, I think I'm going to build two 28mm armies for DBA: a Marian Roman army (with a few extra bases to morph it into Polybian Romans), and an Ancient British army (with a few extra bases to to morph it into a Gallic army). 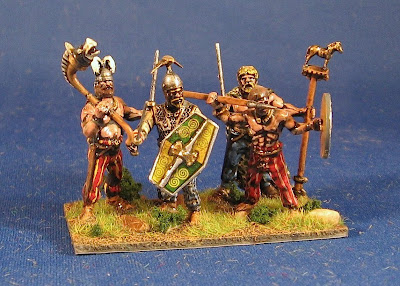 To test the waters, I put together a 4Wb General base for the British. The figures went together fairly well, although I can see it will take me some time to get realistic poses. I can also see I'll need to think a bit about the poses for the Romans if I want to get four on a base.

I left the shields off until the very end and this helped me nest the figures together better. I also ended up extending the base by 10mm in depth (thanks to Tim and Joe for their helpful comments). 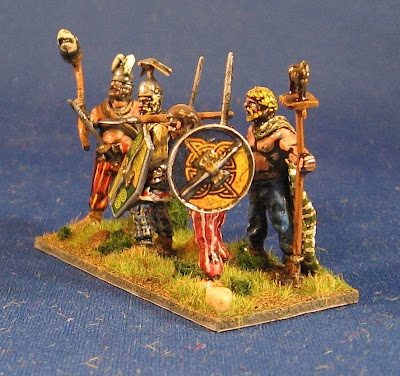 I did a quick build. Quick is perhaps a bit misleading as these took a fair bit more time than a comparable set of metals would. But the variety of poses that are possible is staggering to consider, especially with some mixing and matching.

I'm keen to improve my modeling skills so I opened a tube of putty and added a huge pouch to one of the guys at the back. He and the fellow with the cape are the same basic body (one of the least adaptable poses, in my opinion) but some different fittings, heads and a bit of putty make each one unique. 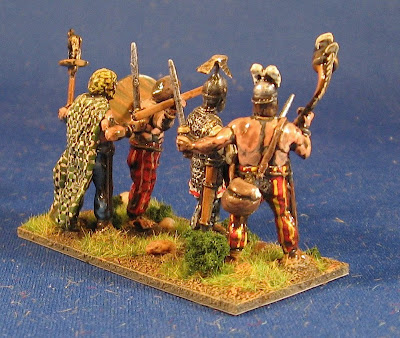 And then I got more ambitious and added a cape to the other fellow. A damned thick and warm cape as it turned out! Live and learn. Anyhow, this was successful enough that the second set of figures I've built (two 3Wb) also have a variety of capes, cowls, and sacks. 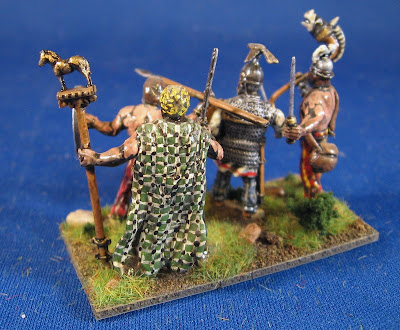 I also spent some time carving up a figure (with much trepidation) to make an archer who has just released his arrow (not shown). That turned out fairly well so I think I will continue to experiment some more. 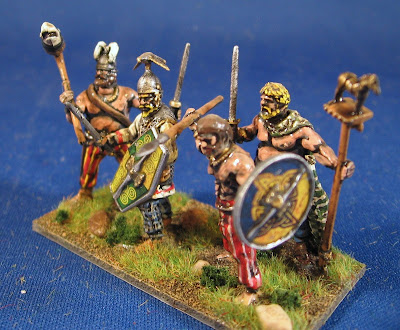 Up next: Probably the two 3Wb bases will roll off the production line this weekend. I'm in no rush to build these so I might go a bit slow and enjoy the process. I will likely also turn my attention to the 15mm Anglo-Irish army that is staring longingly at me from the prep table ("paint us! paint us!"). I think this might be my contribution to the EWG auction but I think I will try to sell it online in in lieu of at the club as there will be a couple of other DBA armies on the block at the club.
at 2:11 PM

Looks GREAT Bob! You're very welcome to post them up on our forum as inspiration to others! Nice work!

Great stuff, as always, Bob! I'm looking forward to seeing the rest of this army - and the Romans!!

Thanks guys. Much enjoying the process so far. I need to pick up a box of chariots (perhaps tomorrow). I always find chariots a bear in 15mm but perhaps 28mm plastics will be better. I have gone a bot overboard on the putty on the next set and will need to build a couple of just regular Celts to offset the overly cloaked and satchelled group I'm working on.

Bob, one of the big issues of putting Wargames Factory (and 28mm in general) miniatures on DBx bases is the fitting problem. If you find out how to fit the Romans onto a DBx 60mm base, please show us how! :)

And of course, Happy New Year!

Well done, especially the additional modifications with the putty. I'm going to have to try my hands at a couple of capes myself!

Thanks. The puttying is a hoot and the randomness of the Celtic wear seems to lend itself to my limited sculpting skills. I think I will rein in my fiddling when I get to the Romans whom I think should look a bit more standardized! There will be enough of a trick getting four of those guys nicely lined up on a 60mm base.

Wow that clock is something else...really nice work. It must have taken you ages.